Maureen and I zoomed out of London on the high speed rail line from London to Folkestone, it follows the Eurostar route out of St Pancras station.

▲ Folkestone is just along the coast from Dover. Back in the pre-Eurostar days Folkestone-Boulogne was the poor cousin of the Dover-Calais ferry services across the English Channel. Dover-Calais is still operating, but the Eurotunnel trains have killed off the Folkestone-Boulogne services and these days the town is trying to find a new focus. One project is the Folkestone Triennial with art installations dotted around the town. I particularly like Hew Locke’s For Those in Peril on the Sea, a wonderful collection of colourful ship models suspended from the ceiling of St Mary & St Earnswythe’s Church. 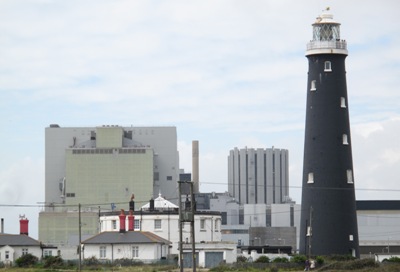 ▲ We travelled further west from Folkestone to Dungeness where a huge shingle promontory projects out into sea. You can climb to the top of the Old Lighthouse, curiously back from the sea although there’s a more modern automatic lighthouse nearby. From the top you can look down on Dungeness Nuclear Power Station, with the sea almost lapping at the station buildings. After the Fukushima meltdown seaside nuclear sites don’t seem like a very good idea, although at least England isn’t so prone to tsunamis. Throw in the Britannia pub with its amazing keyring collection, some interesting artists’ galleries, film director (and other activities) Derek Jarman’s home and a coastal miniature railway ride and there’s lots of reasons to make the trip.