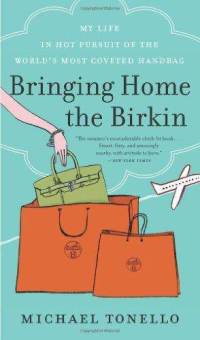 When a promised job in Barcelona falls through, after he’s already moved there, Michael Tonello needs a way to make a living which doesn’t require a work permit. Racing around Europe, and then further afield, and gently extracting pricey handbags from Hermès shops is his unlikely ticket to riches. French luxury goods manufacturer Hermès’ wares includes the Birkin bag, a handbag of such legendary rarity that a mere ‘starter’ bag will set you back US$10,000 and the more exclusive Birkins can cost US$150,000. They’re named after ’60s icon Jane Birkin, Serge Gainsbourg’s muse, mother of Charlotte Gainsbourg, etc etc.

It’s the long waiting list to get a Birkin which ensures its fought over rarity, but Michael discovers that in fact many outlets will have a Birkin sitting on the shelf and with charm and persuasion he can walk out with a bag under his arm immediately, no waiting list required. He then sells the bags on eBay or to his eager regular customers at a handy markup. It’s all completely absurd, but the book is a delight although remarkably the only time Jane Birkin gets a mention is when she’s mislabeled as a ‘French actress.’ She’s English and she’s fascinated me ever since Antonioni’s equally iconic 1966 movie Blow-Up. The Birkin mania continues, earlier this month Victoria Beckham was reported to have spent more than £1.5 million on Birkin bags.