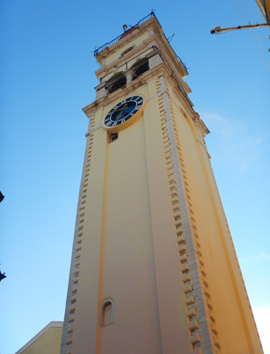 Corfu is the northernmost of the Ionian Islands, at the southern end of the Adriatic Sea, almost at the heel of Italy. It’s not the biggest of the Ionian Islands in terms of land area, but it’s certainly number one in terms of tourists. The constant shuttle of cruise ships and the busy arrivals and departure boards at the Corfu airport certainly underline that story. The north-east corner of Corfu is barely 2km away from the coast of Albania. When I travelled around Albania in 2006 at Butrint (great Roman ruins) my mobile phone was picking up the Greek network on Corfu.

Corfu town is the busiest town in the Ionians with an assortment of museums, galleries and the fine Church of Agios Spyridon housing the remains of Spyridon, the 4th century shepherd who is the island’s patron saint. He’s paraded through the town on festival days. 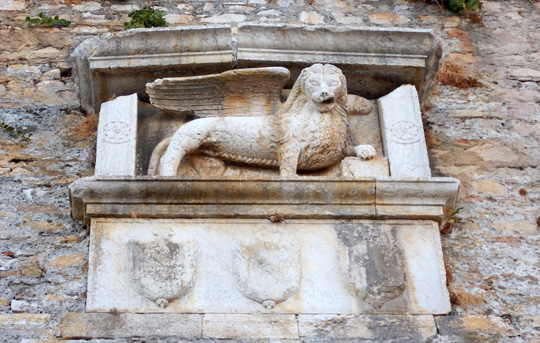 ▲ Venetian lion on the moat wall, beneath the Palaio Frourio

Overlooking the town and the harbour the walls of the imposing 14th century Venetian-built Old Fort or Palaio Frourio once enclosed the whole Byzantine city. It’s separated from the mainland by a seawater moat. The fort is topped by a lighthouse from where there are good views down on the yachts and the town. It’s a bit of a jumble inside the fort walls including a collection of buildings from the British era. The temple-like Church of St George (Agios Giorgios) is in fact a British creation. 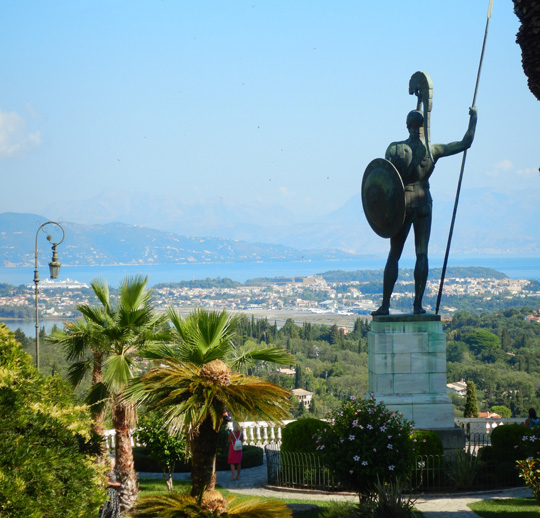 Not far from the town centre the Achilleon Palace was built for the Austrian Empress Elizabeth who was sadly assassinated for absolutely no good reason by an Italian anarchist in Geneva in 1898. He was just looking for somebody prominent to kill and she unfortunately turned up. It’s an impressive building, but definitely needing the extensive renovations it’s currently undergoing.

In the 1981 Roger Moore James Bond episode For Your Eyes Only the great views from the palace balustrade feature and it also becomes a casino for 007 to show his gambling skills. Poor Empress Elizabeth was the niece of King Otto of Greece. Later the palace was bought by Kaiser Wilhelm II who added the big Achilles statue. 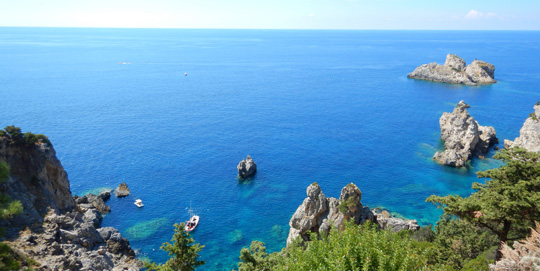 Beautifully sited Paleokastritsa is a very popular resort and was also the landing spot for Homer’s Odysseus when he arrived in Corfu. The resort is overlooked by the Moni Theotokou Monastery with an interesting little museum and wonderful views down to the coves and bay below. There are more great views of Paleokastritsa from the villages of Lakones and Krini high in the hills above the coast. 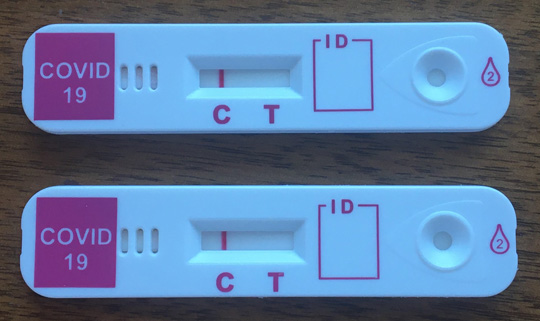 ▲ We had one final task to do before departing Corfu and heading back to London, the inevitable Covid-19 test. Fortunately it was a cheap and quick rapid lateral flow antigen test, not a much more time consuming and expensive PCR test. Look, we both passed.