I’m kicking around Europe’s last forgotten corner. Communism finally collapsed in this tiny country a couple of years after it had fallen apart in the rest of Europe. Enver Hoxha, the long term ruler of Europe’s last outpost of Stalinism and then Maoism, had died in the mid-80s, but somehow Albania remained isolated and forgotten until, finally, the angry mob pulled Hoxha’s statue over in the main square of the capital, Tirana in 1992.

Albania then embarked on a long spell of capitalism-run-wild which reached its nadir with a nationwide pyramid scheme in 1997-98, a period when a virtual civil war took place and a very large proportion of the population lost all their savings. Since then the outside world has heard remarkably little about Albania, but in fact it’s made a surprising recovery.

Travel is easy, there’s lots to see, it’s very cheap and it’s also astonishingly safe. What’s not to like?

Days 1 to 4
I arrived in Tirana on Friday afternoon and surprise number one was that the town centre is party central on a weekend evening with bars, crowds, noise, music and lots of hip looking young people. Albania continued to roll out the surprises as I headed south over the next few days to Berati (an amazing museum of brilliantly painted golden icons), Gjirokastra (a wonderful old town which was awarded World Heritage status last year for its superb collection of old stone houses) and Butrinti (the remains of a Greek-Roman coastal city). 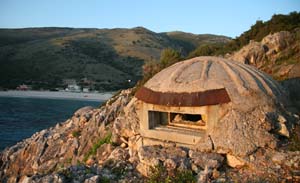 Of course one thing I’ve seen plenty of are bunkers. Hoxha got it through his head that the outside world (American imperialists, Krushchevite revisionists or misguided Maoists) was about to invade Albania and to repel them he built concrete bunkers all over the country – 700,000 of them, one for every 4 Albanians! Some of them are big enough for a troop of soldiers but most are a tight squeeze for one person. They litter the whole country, particularly along the coast. The photo above is of a nicely situated coastal bunker.

Days 5 & 6
Butrinti was not far north of the Greek border and the Greek island of Corfu was just a stone’s throw away. In fact my mobile phone switched over to a Greek phone system while I was there. The Roman ruins marked the southern turn around point of my Albanian odyssey and from there I headed north up the often dramatic coast. 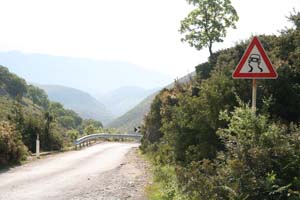 Slowly, the road was winding, often potholed and usually just one car wide. Himara was another night spot and the next day the road soon started to climb, thankfully on a much more modern stretch of road, over the Llogaraja pass. The country’s dramatic geography certainly came in to focus as the sea fell away below us and snow-streaked peaks loomed up ahead.

Bunkers dot the countryside around Apollonia

Apollonia is Albania’s second ancient Roman site but, unhappily, not as well looked after as Butrinti. Unfortunately the Albanians have decided that litter is another of the advantages of the post-communist world and there’s lots of it at this site. Plus some of the Apollonia remains are actually well outside the site, if you didn’t know to look for the Nymphaeum you’d completely miss it 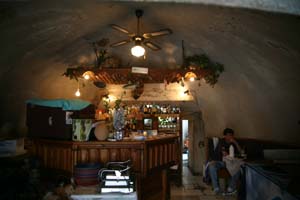 North towards the port of Durrësi there’s the hill top monastery of Ardenica with another icon-packed church. Durrësi has a battered old amphitheatre but also features the best use of a Hoxha bunker on my whole trip, the seaside Bunkeri restaurant boasts a bunker bar.