Flying the Other Way – London to Melbourne


Back in July 2021 I flew from Melbourne in Australia to London in England and posted how it was a surreal experience. Departing a virtually empty international terminal in Melbourne – the 35 passengers on our Singapore Airlines Airbus A350 was it for the afternoon. Then transiting what looked like a dystopian future movie set at Changi Airport in Singapore. Before arriving in what felt like a pretty normal London Heathrow.

It was a different experience flying back London-Singapore-Melbourne, again with Singapore Airlines, but first there was a folder full of paperwork to assemble.

Requirement Number 3 was irrelevant since I did the test for Number 2. I dropped in my test sample to my local pharmacy in London, they sent it to the lab at 1500 (3pm) and I was guaranteed a result by 1800 (6pm) the next day, still 17 hours before my flight departed. In fact the result arrived soon after 1400 (2pm) and I could relax.

4. An Australian Travel Declaration from the Department of Home Affairs, this agreed that I was vaccinated and had passed the PCR test and since I was flying in to Sydney or Melbourne there were no quarantine requirements. Flying in to Brisbane, Adelaide or Perth would have been much more complicated.
5. An International Border Travel Permit to enter the State of Victoria. This was basically a repeat of Number 4 and since I’d already done domestic Border Travel Permits for the State of Victoria on several occasions I was pretty confident this would, one again, be something that wasn’t even glanced at.

I’d been away for four months so it was interesting which ‘country’ my flight from Singapore would arrive in. Of course I was fully prepared, I had my Australia Travel Declaration in case my flight arrived in Australia, but if it wasn’t Australia but Victoria where we turned up, well I’d got that Victoria International Border Permit as well.

So off we went, check in at London Heathrow was much quicker than I expected although they checked the paperwork. It wasn’t checked on arrival into Australia. The Boeing 777 was pretty much full, a much better load factor than the opposite flight back in July which was only just over 50% full. What was distinctly strange was the route we flew. Routes across Asia are constantly changing as danger levels ramp up and down. After the Russians (thank you Mr Putin) shot down Malaysian flight MH17 in 2014 nobody wants to fly over eastern Ukraine. Nobody wants to fly over Belarus either since mad dictator Lukashenko forced a Ryanair flight down.

Currently nobody wants to fly over Afghanistan. Before the Taliban takeover the route over Afghanistan was the shortest way between London and Singapore. Over the years I’ve seen many different routes, but most of them start or finish across northern Europe. Like this SQ317 flight a few days after mine which avoided Afghanistan by flying slightly to the east of that country, heading south over Pakistan and India. 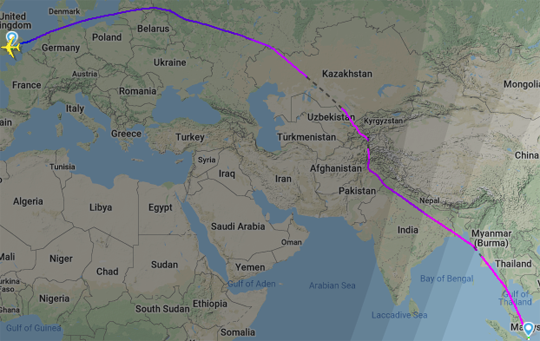 In contrast SQ317 on 17 November flew south of the Greek mainland and across eastern Egypt and then Saudi Arabia. Much further south than any route my flights have followed in the past. It added about 800km and an hour’s flying time to the shortest route. No wonder we were an hour late into Singapore. 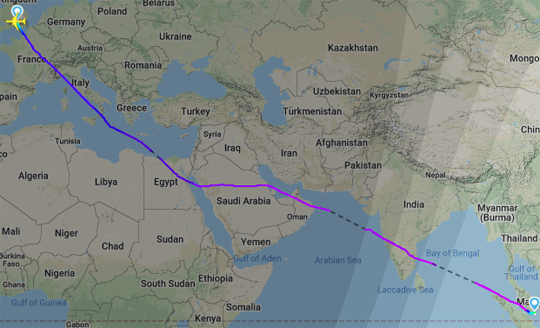 Unlike the Changi Airport dystopia look back in July with everybody in PPE and arriving passengers marshalled in holding pens, Singapore’s airport looked pretty normal, if much less crowded than the old days. My flight from Singapore to Melbourne, however, was very crowd free although not quite as empty as its counterpart in July. This time the 303 seat Airbus A350 had 69 passengers on board, last time it was only 35. Given that for the past year Australian media have reported incessantly that there were up to 40,000 Australians desperate to return to the motherland, but unable to get on a flight, the low passenger load was a real surprise. In fact I’d been booked on a Qantas flight London-Melbourne for the same day, it was cancelled when not enough passengers booked!

The Australian government provided one final delight, shortly before arriving in Melbourne there was a lengthy government announcement over the aircraft PA system warning us about the pandemic (surprise surprise), about lots of government regulations we’d encounter (more surprise) and then advising us we could go online to check privacy issues with all the information we’d had to provide. Finally we landed in Melbourne, we got up and milled towards the exits and then – dammit – the same endless, boring government message was read out all over again. Right down to handling privacy issues. Was I the only passenger who felt like strangling the first Australian government idiot he encountered?

Once off the plane everything was fine and yes, my Victorian state government permit was not collected, despite orders to print it out. We even had a thoughtful taxi driver (from Somaliland) driving us home and reporting on a friend who didn’t get vaccinated, got Covid-19, fortunately not too seriously, and headed straight off for a vaccination as soon as he emerged from hospital. Soon after arriving, however, I got a Victorian government text message ‘now you’re back in Australia go and get tested within 24 hours.’ Fortunately the test was free, unfortunately the testing arrangements were far less than super-efficient and doubly unfortunately I’ve got to repeat the procedure within 5 to 7 days. 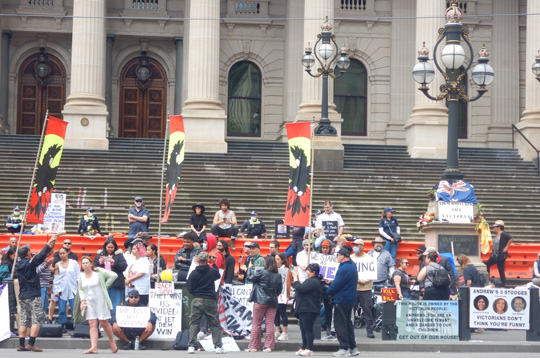 The next day I hopped on my bicycle and rode into central Melbourne to check the protesters assembled outside the Victorian State Government Parliament building. They were opposed to vaccine mandates, lockdowns and restraints on their freedom in general, a rag-tag bunch of anti-vaxxers, far right protesters and anybody else looking for something to complain about. I’m all for vaccine mandates, I don’t want to be pushed up against idiots who think it’s their right not to get vaccinated. On the other hand I’m glad somebody is protesting about something. One of my serious pandemic disappointments is how Australians have so readily accepted all the rules, regulations and often idiocies forced on them by assorted governments. OK I don’t agree with most of what the protesters are protesting about, but I’m very glad that somebody is complaining about something.