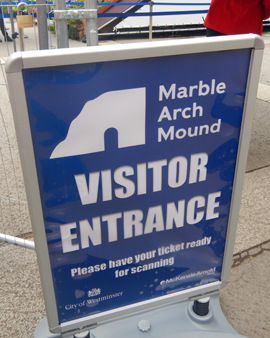 It’s been a year for climbing peaks. Back in April I finally got around to climbing Mt Kosciuszko, Australia’s highest peak. And now I’ve climbed Mt Marble Arch. Someone had the clever idea that building an artificial 25metre high ‘peak’ beside Marble Arch – at the junction of Bayswater Rd, Edgware Rd, Oxford St and Park Lane – so as central London as you could get, would somehow rejuvenate post-pandemic Oxford St, that hugely important shopping boulevard. 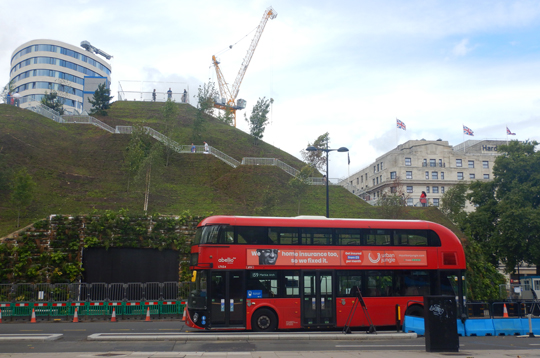 The Marble Arch Mound opened in late July 2021 with an entry price (or climbing permit fee) of £4.50 and two days later shut down to almost universal condemnation as ‘London’s Worst Tourist Attraction.’ 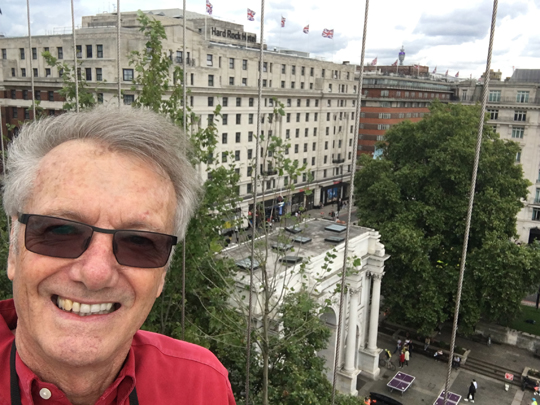 It reopened with the entry price reduced to £0.00 (ie free) so I pedaled a bike over to the Marble Arch base camp and in one non-stop push made it to the summit, no supplementary oxygen was needed. 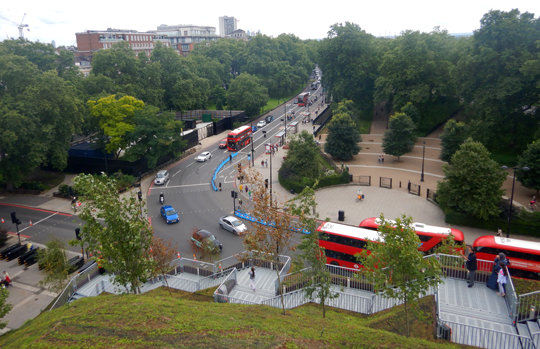 On the other hand the view is not that special, but if you’re going to climb London’s new mountain do it soon. The zero price tag may be for August only. This is the view looking south down Park Lane towards Hyde Park Corner.

Marble Arch is the starting point of the Arch to Arc, an ultra-ultra-ironman triathlon. From Marble Arch in London you run 87 miles (139km), ie three marathons, to Dover in Kent, then you swim 22 miles (35km) across the English Channel and hop on your bicycle to pedal 180 miles (288km) to the Arc de Triomphe in Paris. In 2019 Mayank Vaid from Hong Kong did it in 50 hours and 24 minutes.

Way back in 1959 (over 60 years ago, so I was still very young) I went with my father to watch competitors set off from Marble Arch to the Arc de Triomphe on another race. This was organized by the Daily Mail newspaper to commemorate the £1000 prize they’d offered in 1909 to anybody who could fly across the English Channel. The 1909 prize was duly taken by Frenchman Louis Blériot and in 2009 I posted a blog about how it only took another 10 years to progress from flying across the English Channel to flying across the Atlantic Ocean, 35km to over 3000km.

In 1959, 50 years after Blériot’s channel hop, the Daily Mail offered £10,000 for the fastest Arch to Arc transit. The prize eventually went, with help from the Royal Air Force, to Squadron Leader Charles Maughan who travelled by motorcycle, then helicopter to Biggin Hill in South London, then RAF Hawker Hunter jet fighter, another helicopter and another motorcycle. He travelled between the two monuments in 40 minutes and 44 seconds. Well you certainly couldn’t do that today!