The Towers of Trebizond – a wonderfully absurd book 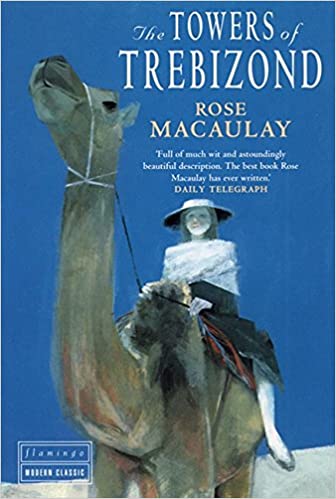 I can’t remember what led me to The Towers of Trebizond by Rose Macaulay – it might have been a mention in The New York Review of Books. Indeed they published a reprint of the book in 2003 and although, like all the other editions, it seems to be out of print you can read the introduction Jan Morris wrote for that edition on Amazon.com.

◄ This is the cover of the second hand copy I found, published by Flamingo.

The author was very much an English literary character and this was the last of many books she wrote – published in 1956 when she was 77. She died soon after, but the book was a critical and popular success on both sides of the Atlantic.

The review in The New York Times is an accurate summary: ‘Fantasy, farce, high comedy, lively travel material, delicious japes at many aspects of the frenzied modern world, and a succession of illuminating thoughts about love, sex, life, organized churches and religion are all tossed together with enchanting results.’ Of course ‘the frenzied modern world’ is now nearly 70 years ago, but no matter.

• Take my camel, dear’, said my Aunt Dot, as she climbed down from this animal on her return from High Mass.

So two of the book’s key characters – Aunt Dot and the camel – have appeared immediately. A third character – the High Anglican clergyman friend Father Hugh Chantry-Pigg (who keeps his collection of sacred relics in his pockets) is soon introduced and neatly described as ‘an ancient bigot.’ Then there’s Laurie, who narrates the story and does most of the camel riding. Plus a changing cast of other characters. The Wikipedia entry sums up the story very well although it’s inaccurate when it notes that it’s still in print.

The book starts in Istanbul – still Constantinople to Aunt Dot, still Byzantium to Father Chantry-Pigg. Trebizond today is the Turkish Black Sea port of Trabzon. The characters wander around north-east Turkey – in the shadow of Mt Ararat, a mountain I’ve passed by (at ground level and from high above) a few times in my life. Then two of the cast – Chantry-Pigg and Aunt Dot – traipse across the border into Russia and Laurie turns south to Syria, Lebanon, Jordan and Israel before heading back to Istanbul and then England.

As that New York Times review indicates it’s a magnificently absurd book and surprisingly, despite being out of print for so long, it still seems to generate lot of interest. Many people think, like me, that it is absolutely wonderful – and absurd – while others think it’s awful – but also absurd. Hardly surprisingly it also generates the odd accusation of being racist, if it is then Ms Macaulay is an equal opportunity racist because she certainly makes fun of the English and their absurdities. As for riding all the way from the Black Sea to Jerusalem on a camel in the mid-’50s? Or taking an ‘ape’ (what sort of primate, it’s never defined?) back from Istanbul to England and teaching it to drive, ride a bicycle into the village on shopping trips, play chess, croquet and tennis and go to church? Plus there’s the endless, but I have to admit amusing, digressions into religion – Christianity that is – and its endless absurdities. Particularly ‘high’ Anglicanism, the Church of England variety which is really Catholicism without the Pope?