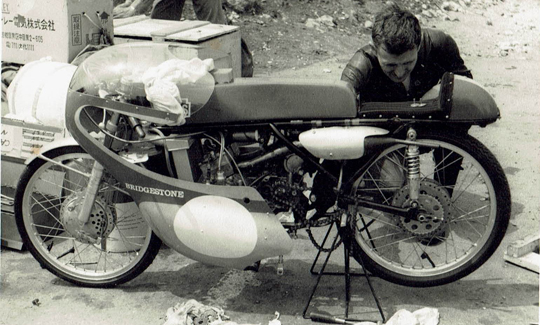 ▲ Locked down in Australia I’ve been going through my old photo collections – like my recent posting on photos of statues. I came across this one that a motorcycle racing friend took in England in 1965. The motorcycle is a tiny 50cc twin cylinder Bridgestone, much better known for their tyres Bridgestone did make motorcycles at one time and had a brief (and unsuccessful) go at international racing. The rider working on the machine is Australian Jack Findlay and although he was never a world champion he did finish second to Giacomo Agostini in 1968 and his wins included at the Isle of Man Tourist Trophy in 1973. 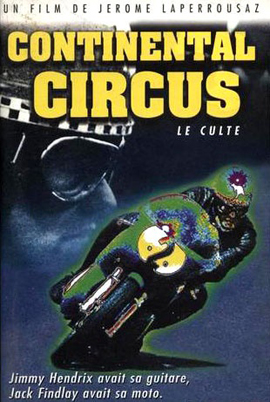 ◄  In that romantic era many riders made a living from weekend to weekend, race to race around Europe as part of the ‘Continental Circus.’ Findlay played a key role as a successful ‘privateer’ and featured in the French film Continental Circus – Hendrix had a guitar, Findlay had a motorcycle according to the film poster.

After he retired Findlay lived in France – he was fluent in French and Italian – working as the Grand Prix technical director of the Fédération Internationale de Motocyclisme. Although he didn’t return to Australia there’s a statue of Jack Findlay, on his motorcycle, in the Victorian town of Mooroopna where he was born. It’s just down the road from Shepparton, which I visited earlier this year. If I’d known about the Findlay connection at the time I’d have diverted to check his memorial. 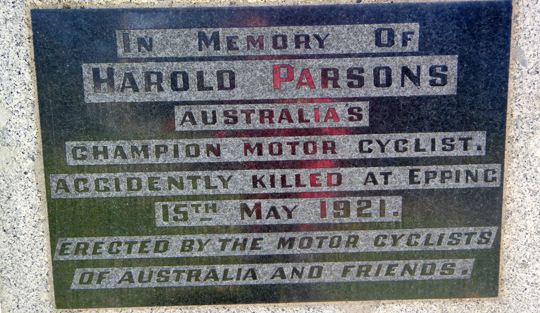 ▲ Only one other Australian motorcyclist has a public memorial and that’s just down the road from me in Melbourne. Harold Parsons is definitely not a well-known name today, but his funeral in 1921 drew a crowd of over a thousand people with a guard of honour of 100 motorcyclists. He’d won many races and set many speed records which had attracted considerable attention before a collision with a horse ended his life.

His records including speeding from Sydney to Melbourne in 20 hours 58 minutes and then from Melbourne to Adelaide in 19 hours 20 minutes. Today Google Maps suggests Melbourne-Adelaide should take 8 hours 1 minute without breaking any speed limits, but then the drive today doesn’t require crossing flooded creeks and following dirt tracks.

▲ The Parsons memorial stands just off Punt Rd (the most unpopular road in Melbourne for its congestion and traffic) and right across Wellington Parade from Yarra Park School. Born in 1893 Parsons went to the school at the turn of the 20th century and lived nearby. Who also went to Yarra Park School? Well over 80 years later my daughter Tashi, I used to ride to the school every morning, with Tashi perched on the back of my bicycle, and then circle back a couple of hundred metres to the Lonely Planet office in Richmond. The school closed in 1986, Richmond – once known as ‘struggletown’ – was moving upmarket and there were no longer enough schoolchildren to keep it open. Today it has been converted to apartments.