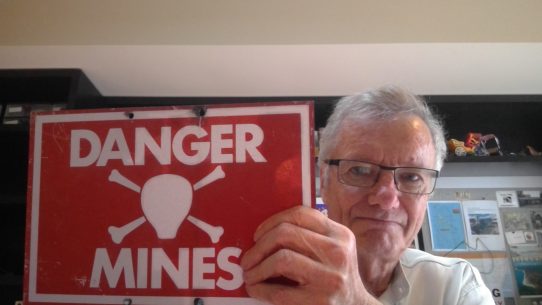 ▲ Just a few weeks ago it was announced that the last of the 30,000 land mines the Argentinians scattered in the Falkland Islands after their 1982 invasion had finally been cleared. Coincidentally I stumbled across this minefield sign I’d brought back from the Falklands as a souvenir of my 2003 visit to the islands. I really enjoyed my Falklands visit which took me to both main islands and to many of the smaller islands, some of which have never suffered from rats, like the main islands – West Falkland and East Falkland, and as a result still harbour vulnerable populations of smaller birds. One small island was about to be declared rat-free while I was in the Falklands and the rat-exterminating experts were New Zealanders. I’ve been to a number of places in the world where projects to wipe out something undesirable were happening and remarkably often it was New Zealanders doing the wiping out. 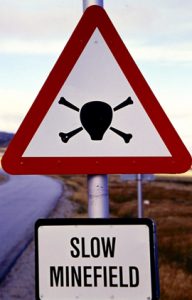 Incidentally I didn’t simply steal my minefield sign from a ‘live’ minefield. Even all those years ago there were already minefields which had been cleared and their redundant signs were on sale in Stanley, the Falklands capital.

◄ I did note the Falklands had the odd ‘Slow Minefield.’ Presumably there must have been some ‘Fast Minefield’ warnings as well? The Falklands mine clearers were led by around 100 Zimbabweans who worked on the operation for a decade. They’d developed their mine-clearing expertise in their own country which also had lots of land mines from the independence struggle. 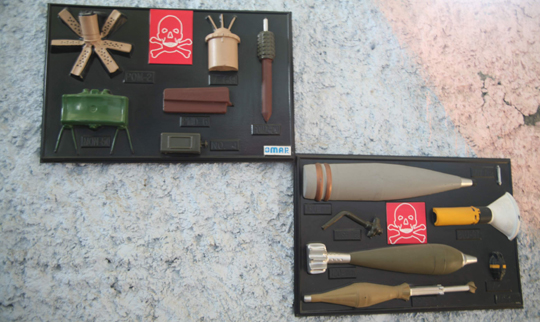 ▲ Mine display at the OMAR Museum in Kabul, Afghanistan.

I’ve been to a number of countries with ongoing land mine problems – Afghanistan for example where I visited the OMAR (Organization for Mine Clearance & Afghan Rehabilitation) Museum during my 2006 visit. Of course you’d expect land mines to be a problem in countries like Cambodia or Laos, but amazingly mines still turn up in France and Belgium from WW I, 1914-18 so over a century ago. Periodically some unlucky farmer ploughs into one.