I drove up to Shepparton, a town almost exactly 200km (125 miles) almost exactly north of Melbourne in Australia to visit the Shepparton Motor Museum. With a few other interested Melburnians I’ve been kicking around the idea of establishing a Melbourne Transport Museum. After all Victoria was the car building centre of Australia with cars rolling off the Holden, Ford and Toyota production lines. All gone now. Throw in railways, trams and aircraft and there’s a lot of transport history in Melbourne. 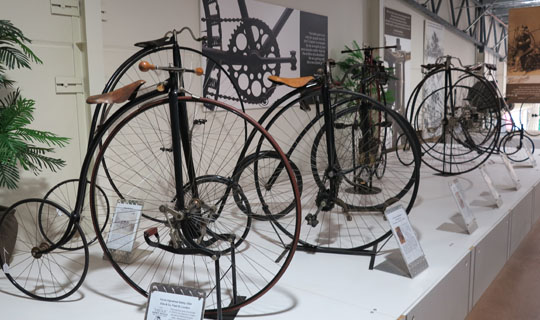 ▲ One of the interested parties is Charlie Farren, she has a wonderful collection of old bicycles some of which feature in the Shepparton Museum. These are some of the penny farthings. Click here for my ride last year on one of her bicycles, an 1891 Overman Victor. 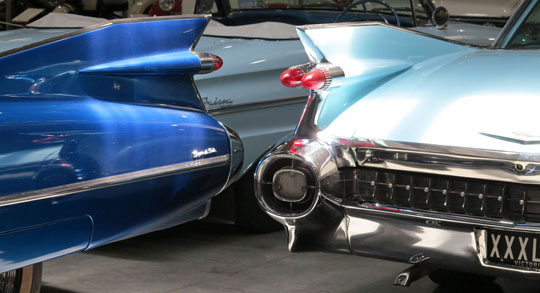 ▲ The museum also includes a diverse collection of cars including these two very fine 1959 Cadillacs. It was 26 years ago that I drove across the USA coast-to-coast in a ’59 Caddy. Mine was not in perfect condition like this Shepparton twosome, but it did get me (Maureen and our two children) from San Francisco to Boston and then, a few months later, back in the other direction. The museum also features assorted other cars including a fine lineup of British Minis and an interesting collection of farming and other equipment from the local manufacturer Furphy.

From Shepparton I drove 50km east, heading towards the bushfire region of northern Victoria although I never got close, to visit Devenish. Last year I drove the ‘Silo Art Trail,’ about 300km west of Melbourne. Artists have painted wonderful portraits on a series of grain silos and it’s become a popular outdoor art gallery, stretching 200km from the first art silo to the last which might make it the world’s largest art gallery with the world’s largest portraits. 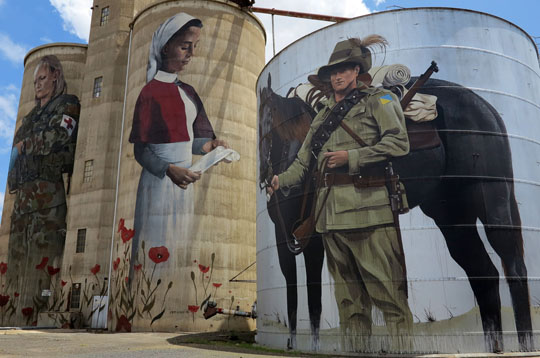 ▲ The silos at Devenish were painted in 2018, for the 100th anniversary of the end of World War I. They illustrate a WW I nurse and a modern army medic and commemorate the 50 local men and women who enlisted during that long ago war. In 2019 the same artists, Cam Scale, added a lighthorse man to the third silo. 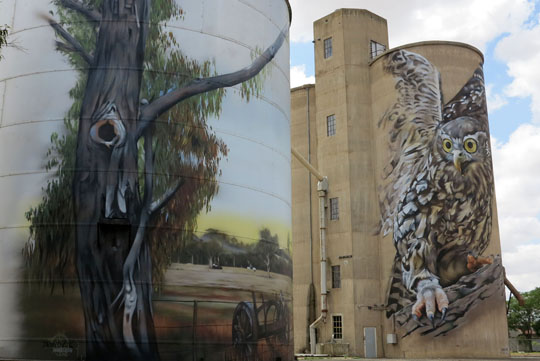 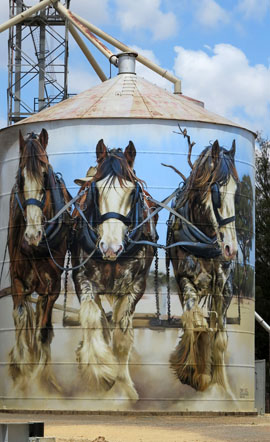 ◄ and three (noted) Cyldesdale horses on another. I’m told there are more painted silos in the region, so I could set out to explore another silo art trail. 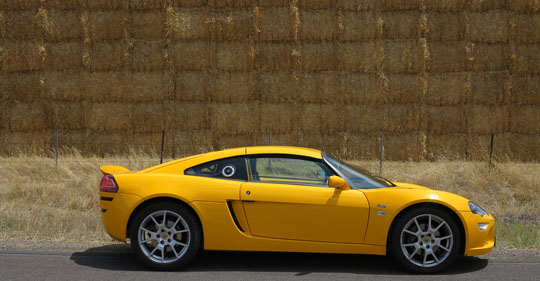 ▲ I’d driven up to this farming region of Victoria in my Lotus Europa, it looked very nice against a haybale backdrop.