Locked down in Melbourne for what seems like half my life-time now I’ve been very unenthusiastic about posting anything. Although in fact I have been ‘travelling’ in a fashion. I’ve been going through my colour slide collection, from the days before I switched to digital photography. I wish I’d switched a few years earlier and not accumulated so many ‘trannies.’ Anyway I’m going through them, throwing a lot out and digitizing others. Statues are one of the subjects which have popped up regularly.

◄ I took this photograph of a statue of Sun Yat-sen in San Francisco’s Chinatown back in 1996. He was, according to Wikipedia: ‘the provisional first president of the Republic of China and the first leader of the Kuomintang (Nationalist Party of China). He is referred as the ‘Father of the Nation’ in the Republic of China for his instrumental role in the overthrow of the Qing dynasty during the Xinhai Revolution. Sun is unique among 20th-century Chinese leaders for being widely revered in both mainland China and Taiwan.’ So where was the statue? Answer: St Mary’s Square. 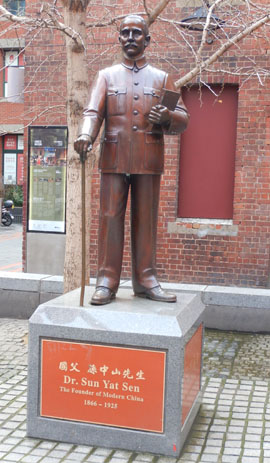 ◄ Researching that led me to another Sun Yat-sen statue, this one in Melbourne’s Chinatown. Remarkably this statue was just inside the 5km circle from my front door which was the limit of my (legal) travel during the most severe stage of Melbourne’s Covid-19 lockdown. When I posted a blog on cycling the 31.4km circumference of that lockdown circle I also noted passing a statue of Matthew Flinders, the man who in Australia has more statues than anybody except Queen Victoria. I’ve studied Flinders statues in Australia and the UK and noted that his faithful cat Trim also has three statues, one in Sydney, one in London and one at Flinders birthplace Donington.

Statue research also took me to this statue outside the Shelbourne Hotel in Dublin, Ireland. Sadly in mid-2020 it became a victim of the worldwide enthusiasm for ‘cancel culture,’ well she was a ‘slave girl’ so down she came. Along with her three companions. In fact she may not have been a slave girl at all, they were pretty much bought out of a catalogue for their installation in 1867. Fortunately there’s been a local protest and she may be back in place, although when I rang the Shelbourne Hotel the woman who answered the phone was a little uncertain if they had already been reinstalled or not! ► 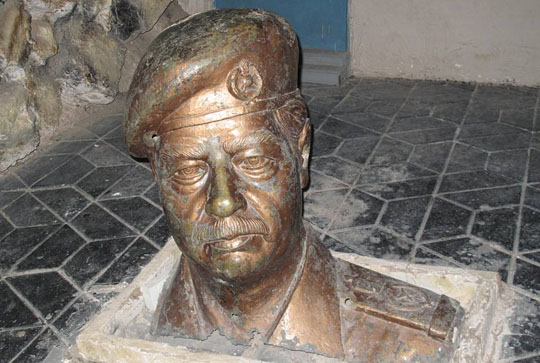 ▲ Cancel culture and its impact on statues is certainly not restricted to slavery connections, assorted dictators and politicians are regularly removed. This Saddam Hussein head in Kuwait was probably attached to a whole statue of the Iraqi leader once upon a time. Sadly the US invasion in 2003 did all sorts of damage to Iraq including to its Hussein statue collection. 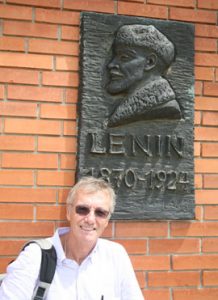 ◄ Russia and the old Iron Curtain countries have a much better use for now out-of-favour leaders. I stood beside this Lenin bas relief on a visit to Budapest’s Statue Park in 2009. It’s a home to assorted statues from the Communist era. Remarkably Russia still has quite a few Lenin statues around the country, so for that matter does Transnistria which I visited in 2018. Surplus Lenin (or Stalin or Marx) statues in Russia might end up at their Muzeon Park of Arts (formerly the Park of the Fallen Heroes or Fallen Monument Park), dedicated like Statue Park in Budapest to all the hereoes of the Communist era who are no longer so heroic today. The statue of Felix Edmundovich Dzerzhinsky is on a notably high pedestal, because he’d be vandalised if he was more accessible. He’s got ‘the red terror’ attached to his name and is looked upon as the creator of the KGB.