Gorillas may be the big Uganda wildlife, the creatures everybody wants to meet, but there was certainly lots more to be seen. Plus I ticked off the African Big 5 – lions, leopards, rhinos, elephants and African buffaloes – during my visit. 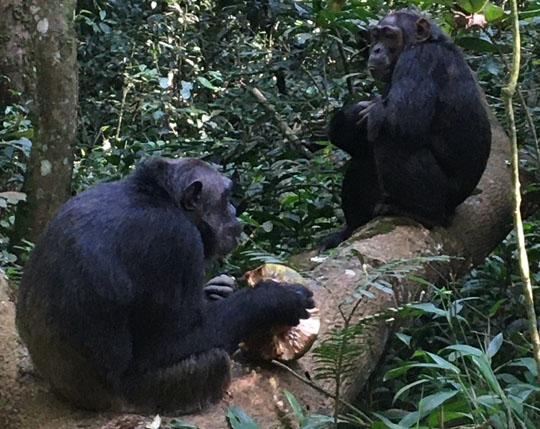 Gorilla tracking is the Uganda ‘must do,’ followed by chimpanzee tracking. In the Kibale Forest I joined two other visitors for a ‘habituation visit,’ that meant we got longer than the standard hour long meeting with one of the forest chimpanzee families. Like the gorillas I was tracking a few days earlier we couldn’t even find them at first so we stopped for an hour or so while they were located. Then there was a spell of real bush bashing, just like the gorillas again, and then there they were. Four were right up in the trees, high above us, then there was a smaller group close to hand for a short period, including a baby.

At which point one of the chimpanzees sets off and we followed, on and on, he stopped, we stopped, he moved, we moved. Finally he climbed a short distance up a tree to enjoy a wild jackfruit he’d found and we sat down with him for a long while. At which point he reversed direction and set out right back to where we started, we engaged in the same following process. When we were back to the starting point he and two others sat down on a fallen branch and he continued with his jackfruit munching.

The other two watched him with a definite ‘are you going to share that wish us?’ look, but the answer was definitely ‘no I am not.’ Eventually they decided enough was enough and left, finally he did too. The jackfruit hoarder was Riupwe, he is the alpha male in this group. The two watching him were Murungi and Sunday, they were three good guys, quite relaxed about us watching them. They’re all part of the large Briaga family, are they 88 in total? And are there 13 families in the Kibale Forest, only three of which are fully habituated? Although Riupwe was the alpha male in the family chimpanzees are not like gorillas, where only the boss silverback mates with his harem of female gorillas. In fact chimpanzees are quite promiscuous, which does have the benefit that male chimpanzees are likely to be protective towards any babies in the family, they might well be theirs! 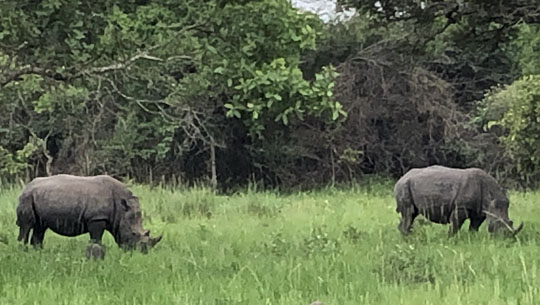 ▲ Rhinos in the Ziwa Rhino Sanctuary

Wildlife management in Uganda fell apart during the Amin years and the subsequent chaos and as a result rhinos, white and black, were poached to extinction. In 2005 rhinos were reintroduced to Uganda at this 70 square km reserve, originally a private ranch. From six southern white rhinos, four from Kenya and two from, wait for it, Disneyworld in the USA the population has grown to 33 and it’s intended to start reintroducing them to the wild, at the Murchison Falls National Park, once they have 50. All the rhinos are named and one of the first offspring was from a Kenyan male and an American Disneyworld female. A Kenyan father and an American mother? Well naturally they named it Obama.

I picked up Patrick (I’ve had several Patricks) my ranger-guide from the rhino headquarters and we set out to search for those hefty creatures. Rhinos are short-sighted, so they don’t spot us wandering around close to them. They do have good senses of smell and hearing so we need to have used the deodorant today and not talk too loudly, but we certainly got very close. 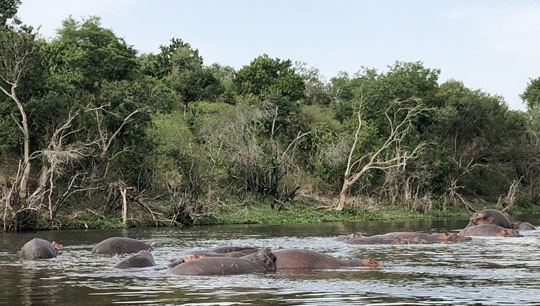 There was no shortage of hippo encounters although generally all you see is their eyes and ears, just above the waterline and watching you intently. Lake Mburo, the Ishasha River in the Queen Elizabeth National Park and most definitely the Victoria Nile all offered plenty of hippo opportunities – crocodiles as well. Despite spending all their life either in or very close to water hippos don’t swim, they like shallow water and effectively walk around on the bottom. They can hold their breath underwater for up to five minutes 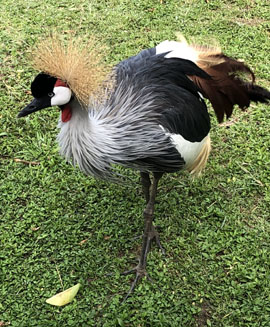 And then there were the birds, twitchers (enthusiastic bird watchers) are right at home in Uganda and they’re always pleased to see the national bird of Uganda, the grey-crowned crane. It’s certainly a handsome wader, but it’s the flag colours – black, red and yellow – which confirm its national bird status. Smaller birds included assorted very colourful bee-eaters and equally colourful kingfishers. In Queen Elizabeth National Park I enjoyed the prolific long-tailed mousebirds and thought it was their mousey colour which led to the name, no it’s because they scurry around like mice I later read. 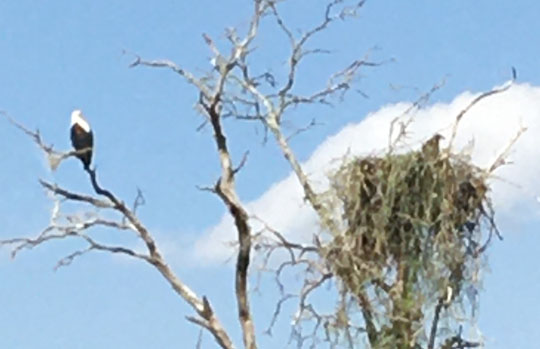 There were regular sightings of hefty fish eagles along every river and lake. The females are always larger than their partner, they mate for life and they share all the responsibilities, nesting, feeding and raising their offspring. But they never share food, ‘you want a fish, catch it yourself.’ 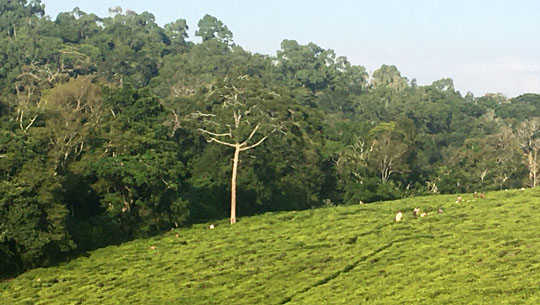 Uganda has lots of tea and coffee plantations. If gorillas leave their park-forest homes and venture into surrounding village land they can quickly devastate your banana plantation. Elephants don’t treat farmers’ fields with much respect either. So tea or coffee can make an excellent buffer zone between park and village land, not much wildlife likes a good cup of tea or coffee.