Funny how you can go in half a dozen short steps from the Booker Prize to Zimbabwe to Cecil Rhodes to Joshua Nkomo to Robert Mugabe to North Korea to Nancy Pelosi to Taiwan. 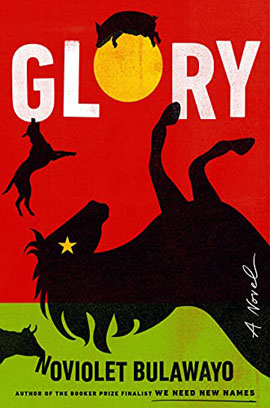 Zimbabwean author NoViolet Bulawayo’s new novel Glory has been longlisted for the 2022 Booker Prize. I haven’t read it yet, but it sounds like George Orwell’s Animal Farm, but based on Zimbabwe despot Robert Mugabe’s departure from power and the arrival of another African ‘big man’ in the command seat.

Mugabe has assorted reasons to be condemned including bankrupting his country of course. He was also responsible for the Gukurahundi massacres, which feature in Glory. Bulawayo is the 2nd largest city in Zimbabwe, after the capital Harare, and it was ground zero for the massacres in 1983.

I visited Bulawayo in 2011 (and blogged about my travels) when I was researching my book Dark Lands and I noted an empty statue plinth at the intersection of Eighth Ave and Main St, near the Bulawayo Club and in the centre of the town. From 1904 until 1981 the plinth was topped by a statue of British colonialist Cecil Rhodes. It only lasted a year after Zimbabwe’s independence before it was removed and today statues, memorials and other reminders of Rhodes are certainly under threat in Britain, he’s no longer so popular. When I was in Bulawayo the Rhodes statue was still around, at the Natural History Museum. 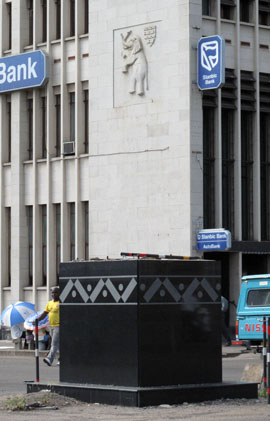 For 30 years the plinth stood empty until in 2010 a statue of local hero Joshua Nkomo briefly took up residence. Nkomo had led the ZAPU forces in the independence struggle and Bulawayo is the Nedbele heartland, where support for ZAPU was strongest. A 1980s power struggle between Robert Mugabe’s ZANU party and ZAPU led to Mugabe sending in his North Korean trained Fifth Brigade and the ensuing Gukurahundi massacres had a strong element of ethnic cleansing and may have taken as many as 100,000 lives. As a result Mugabe’s name is not very popular in Bulawayo.

Mugabe was still in power so it may not be true that the statue was soon removed because of complaints that ‘Nkomo wouldn’t have worn a suit’ or ‘his head wasn’t that small’. The most serious allegation was that the statue had been sourced from North Korea, memories of the massacres a quarter of a century earlier were still fresh. The Rhodes statue had lasted for 76 years, Nkomo was only up for a few weeks and most of that under a black shroud.

Statues aren’t Zimbabwe’s only North Korean connection. When he fled Ethiopia another despot, Mengistu Haile Mariam, was taken in by Zimbabwe and has been there ever since. Periodically, and most recently when Mugabe was kind-of-toppled, it was speculated that Mengistu might have to flee Zimbabwe and North Korea was proposed as a safe place of exile. For Mugabe too it was suggested, but he managed to die first.

Musing about Mugabe, Zimbabwe and bankruptcy reminded me to check what had been happening with Zimbabwe’s Boeing 777s. Mugabe managed to bankrupt Air Zimbabwe as well as the whole country, but in 2018 the government bought two 777s from Malaysia Airlines. After losing a 777 (flight MH370) over the Indian Ocean and a second 777 (flight MH17) when Vladimir Putin’s murderous mob shot it down over Ukraine, nobody wanted to fly on a Malaysia 777 and they were desperate to sell their remaining fleet.

Along came the Zimbabwe government with a blank cheque book and the Malaysians could clearly see somebody foolish (no, more than foolish, outright stupid) flying towards Kuala Lumpur. A 777 painted as Zimbabwe Airways (remember Air Zimbabwe was comprehensively bankrupt) soon arrived in Harare and soon flew back to Kuala Lumpur. Zimbabwe had nowhere to fly it, no passengers who wanted to fly on it, no way to maintain it, no crew to fly it. They’d paid US$51 million, or perhaps far more, who knows, for their grounded aircraft and for years they sat on the tarmac. Eventually Z-RGM (surely that cannot stand for Robert Gordon Mugabe?) was flown (by a German and Swiss crew) to Addis Ababa in Ethiopia and there’s been talk about converting it to a freighter and leasing it to somebody or other.

If you want to find out where an aircraft has flown recently you check on FlightRadar24 and the answer for that 777 is ‘who knows.’ It doesn’t seem to have been anywhere of late. But at first I couldn’t even open FlightRadar24 to check the records. This afternoon the site was totally shut down. ▼ 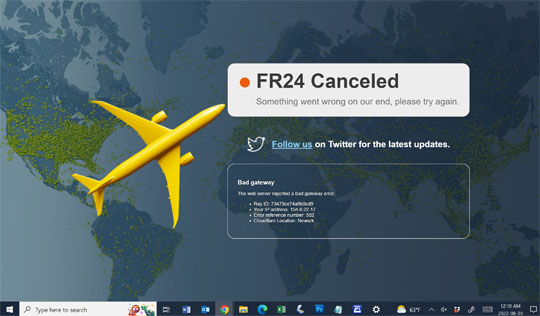 And why? Because 300,000 people had tried to log on to follow Nancy Pelosi and her flight from Kuala Lumpur, Malaysia to Taipei, Taiwan. To the considerable unhappiness of China which seems to believe the Taiwanese would like a dictatorship like China has. Pelosi’s US government aircraft took a slightly roundabout route to Taiwan, ‘the the back-end of Borneo move’ former Lonely Planet China expert Chris Taylor described it. I highly recommend (click to subscribe) the regular China newsletter – ChinaDiction – which Chris produces.

So that’s how I got from the Booker Prize via Zimbabwe, Cecil Rhodes, North Korea, Joshua Nkomo, Robert Mugabe and Nancy Pelosi to Taiwan this afternoon.