Don’t confuse Somaliland with Somalia. Once upon a time the horn of Africa, that sharp elbow pointing east below the Arabian Peninsula, was all Somalia with France, Britain and Italy maintaining colonies. The French bit to the north was French Somaliland and now is the Republic of Djibouti – that’s the topic for a forthcoming blog.

The rest of it was Italian and British and after independence became Somalia with its capital Mogadishu and has effectively become the model for what a ‘failed state’ looks like. It wavers been being mildly chaotic and totally chaotic and if you value your life is not a good place to visit without heavy security. The northern corner of Somalia, however, has broken away, established itself as Somaliland and is pretty safe, pretty functional, reasonably democratic. In Somaliland, which was the British corner of Somalia, things work. In between Somalia and Somaliland is Puntland which is probably not quite as chaotic as Somalia, but nowhere near as secure as Somaliland. This was the centre for Somalian piracy activities for many years. 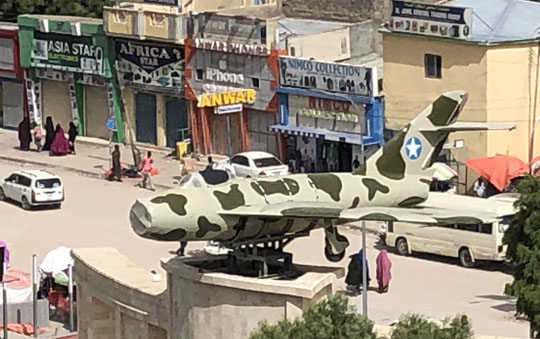 ▲ The War Memorial, topped by a MIG fighter plane, in the centre of Hargeisa

Somaliland’s problem is nobody recognizes it. It’s not in the UN, other African nations don’t want to contemplate a region breaking away and declaring independence. Well it hasn’t gone really well for South Sudan, the last example. As a result it’s often treated as if it’s still part of Somalia. The European Union nations which have some sort of representation in Hargeisa, the capital of Somaliland, treat it as if it’s a war zone. Their people can’t venture out of their armoured compounds without heavy security. So I didn’t bump into them in any Hargeisa restaurant I visited.

Plus there are only a handful of places where you can get a Somaliland visa, Addis Ababa in Ethiopia probably the most popular. In London you can take the tube to the Tower of London station, walk a couple of hundred metres east, pop into the Somaliland office and come out 15 minutes later with a visa in your passport. That’s one problem, money is another, which I will cover in a future blog. I had real trouble paying the Somaliland Travel Agency which organized my travels around Somaliland and Djibouti extremely well.

So after my two weeks in Uganda I flew in to Hargeisa via Addis Ababa in Ethiopia. My first surprise was how much larger it was than I expected. Of Somaliland’s population of about 3.5 million more than one million live in Hargeisa. Next surprise was how hectically confused it was. Anything which you might call a ‘main road’ was inevitably a tangled jumble of vehicles and if you tried to escape the traffic-jam by swerving into a side street you’d better have the 4WD engaged. 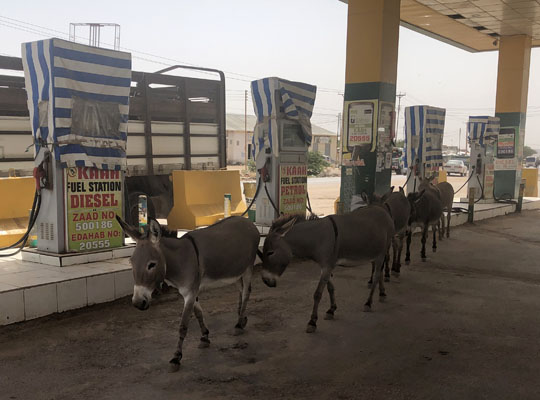 ▲ the traffic wasn’t only buses, cars and 4WDs, all of which seemed to be recycled from Japan so the steering wheel was always on the wrong side. You’d also encounter donkeys and camels. 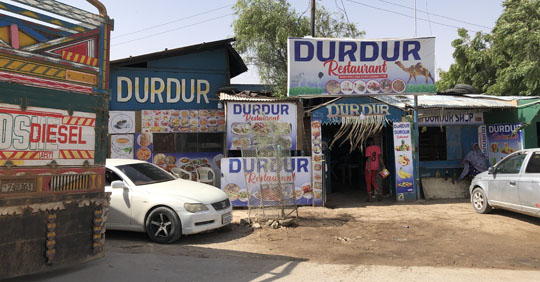 ▲ The shops and signs were certainly colourful 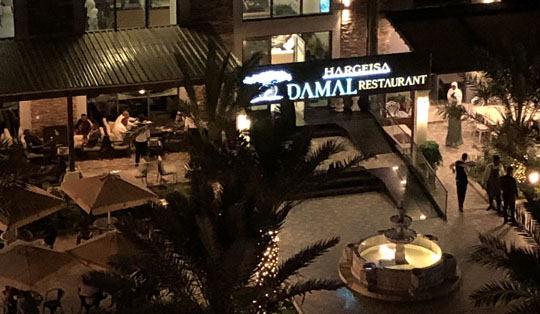 ▲ I stayed in the Damal Hotel right in the centre of town and with probably the best restaurant in town as well. The Damal wasn’t going to win any international five-star awards, but it was clean and comfortable and from the balcony of my room I could look down on that MIG fighter jet on top of the war memorial. 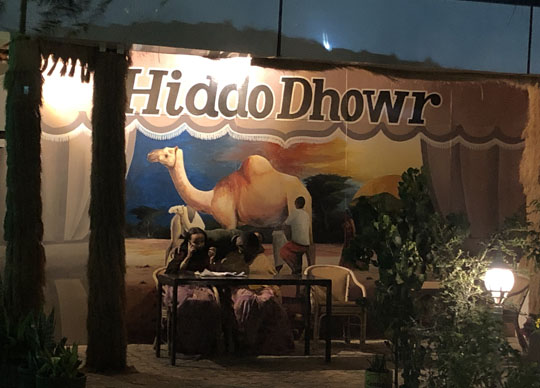 ▲ Abdilahi, my expert driver and guide from Somaliland Travel Agency, took me to Hiddo Dhowr one night, a night club-cultural centre with dance performances, live music and a very enthusiastic and involved audience. 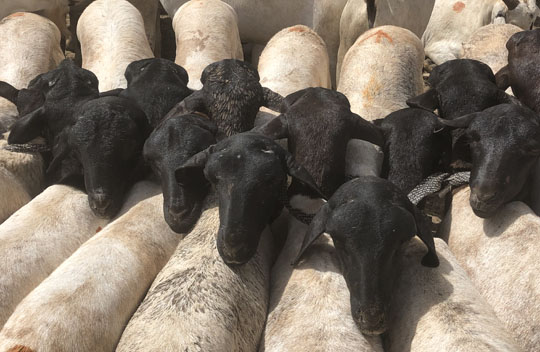 ▲ Interlocked goats at the livestock market, this was not a good day to be a goat in Somaliland

We went to Hargeisa’s busy livestock market on the day before Eid-ul-Adha, one of the two main Eid or celebration festivals on the Islamic calendar. Eid-ul-Fitr marks the end of the fasting month of Ramadan. Eid-ul-Adha marks the end of the annual Hajj pilgrimage season and is celebrated with sacrifices, particularly of goats, so for lots of goats this was their last day on earth. Demand had pushed the price of a good goat up to around US$100 and as we squeezed into the market lots of goats were heading the other way, sometimes to be squashed in to the back seat of a car.

My Somaliland visit included a trip out of Hargeisa to the wonderful cave art paintings at Las Geel. That trip continued to Berbera on the coast with its colourful fishing community and major UAE financed port facility. From Berbera I turned into the hills to visit Sheikh. Another excursion from Hargeisa took me to more cave art paintings at Dhagax Khouré, close to the road to Ethiopia. Finally I visited the Abaarso School, a long term Planet Wheeler foundation project and, to my considerable surprise, to an outpost of the Cheetah Conservation Fund. Who knew there were cheetahs in Somaliland? More on these trips in upcoming blogs.