Earlier today – Sunday 2 August – Daniel Andrews, the State Premier of the Australian State of Victoria (that covers where I live in Melbourne), announced that Victoria was a ‘State of Disaster’ and as a result our Covid-19 lockdown has been amplified. Apart from wearing masks any time we step outside the front door we are now also under a curfew (no going out 8pm to 5am) and we are not allowed to travel more than 5km (3.2miles) from our front door. There’s already an app to show where that is. And here’s our new state car license plate. ▼

But how disastrous is our disaster? Last Sunday, so one week ago, in the New York Times Dr Joshua LaBaer at Arizona State University, describing Arizona’s Covid-19 situation, said ‘We’ve stabilized at 95 miles an hour, and that is not the speed that we want to be going, ideally we don’t want this car moving at all.’

A week later the new cases have continued to slow down in Arizona, they’ve brought their Covid-19 speed down from 95mph (152kph) to 138kph. Still quick enough to lose your licence. You’d lose it even faster in Florida, which has slowed down 20% in the past two weeks, according to the New York Times today, but is still moving along at 181kph. The whole of the USA – good states and bad ones – is currently travelling at 80kph on Dr LaBaer’s speedometer. Too fast for city and suburban streets.

So how disastrously fast is Victoria travelling? Including today’s 671 new cases we’ve averaged 518 new cases a day over the past week – versus Arizona’s 2,423. The population of Arizona is 7.3 million versus the 6.5 million in Victoria, not much different. So we’re currently travelling at 32kph on that Arizona speedo, 106kph slower than Arizona.

I’m still all for Daniel Andrews calling it a disaster, however. Italy, for a spell the worst place in the world, not just the worst in Europe, is currently travelling at 2kph. 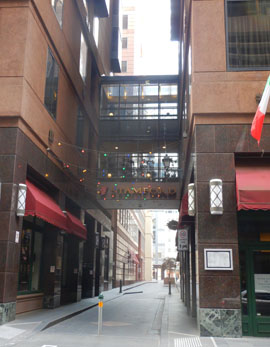 A few days ago, when we were still only semi-locked down, I took my bike and pedaled by the places where our problems originated. One of them was quarantine hotels, where overseas arrivals (mainly Australians returning home) were locked down for 14 days until we were sure they were safe. Unfortunately Covid-19 slipped out anyway, there’s currently a government enquiry going on about badly trained security guards and interesting relationships between those guards and the supposedly safely quarantined returnees.

◄ The Stamford Plaza Hotel on Little Collins St was one of the places where this all went wrong. It’s 5.01km (straight line distance) from my front door so I could just about cycle there tomorrow (between 5am and 8pm). 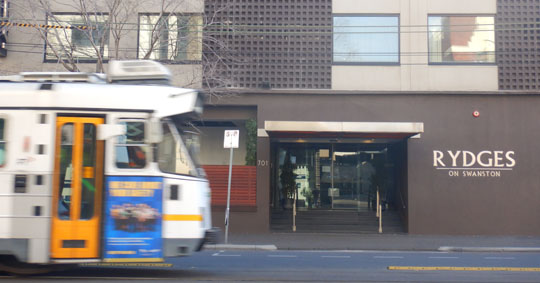 ▲ I also cycled by Rydges Swanston St in Carlton, another failed quarantine location. That’s 5.64km from my front door so I couldn’t go back back to repeat this photograph tomorrow.

Once the virus had slipped out of the quarantine hotels it’s speculated that it then got into Housing Commission flats. In the UK that’s Council Flats, in the USA they’re known as Public Housing. In lots of places in the world – Singapore being a good example – tightly packed housing has been a major source for spread of the pandemic. That certainly happened in Melbourne and as a result the state government locked down 3000 people in nine tower blocks.

▲ The number of cases in one of the tower blocks – 33 Alfred St, North Melbourne – meant it was locked down for even longer. An ABC (Australian Broadcasting Corporation) story highlighted the stark differences between the public housing tower blocks and nearby private apartment blocks. The lockdown was brought in with essentially zero warning, the police turned up, the apartment blocks were quarantined, just like that. In Italy, when the pandemic first kicked off in Europe, there was a warning period and, as a result, lots of people raced out and spread the virus around. In India, on the other hand, the Prime Minister Narendra Modi shut down the country with zero warning. Which was clearly impossible, how many people in India would have stockpiles of supplies or could order supplies to be delivered to their front doors? Hardly surprisingly, except perhaps to Modi, lots of people ignored the lockdown (what else could they do?) and the spread the virus around.

At least in Melbourne there was an attempt to provide food and support to the people in unexpected lockdown, but remarkably one of the best community responses came from Australian Sikhs. This story in the Melbourne paper The Age is one of many documenting the efforts of Sikh Volunteers Australia. When I was in Amritsar, the Sikh ‘capital’ close to the border between India and Pakistan, back in 2012, I stopped in the Sikh Golden Temple and enjoyed the nightly free meal they put on for any visitors. I did make a donation!