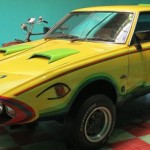 ▲ My 2015 travels also took me back to Yogyakarta, Indonesia’s ‘cultural capital.’ Yogya painter Affandi ‘s home has been turned into a museum and art gallery, his exotically customised Mitsubishi Galant is just as colourful as the paintings. I didn't get outside the ...