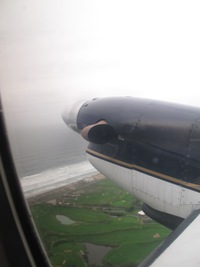 Our October trip from London to Australia was long and low so there were plenty of aerial views. Starting with our first stop on Jersey, just over an hour out of London’s Biggin Hill Airport. Jersey is one of the Channel Islands, close to the French coast, but British and with its own tax laws. So the principal economic activity? Tax avoidance.

From there it was on to Cannes on France’s Côte d’Azur and it was just getting dark as we turned out over the Mediterranean for our final approach.

We hadn’t realised that Cannes has no runway lights! By the time the aircraft was parked we would have needed them.

Next leg was to Valletta on the Island of Malta. We flew across the northern end of Corsica, I’d spent a week on the island a month earlier. Corsica was the birthplace of Napoleon Bonaparte and from Corsica we flew east, passing to the south of Elba, site of his first island exile. We flew directly overhead the rocky island of Montecristo, the fictional setting of the Alexandre Dumas novel The Count of Monte Cristo. Today you need a permit and your own boat to visit the island. 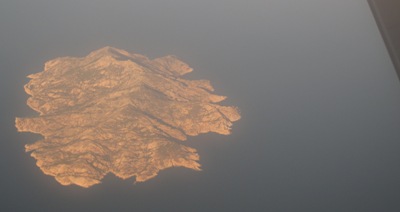 Our route in to Valletta took us over Gozo and tiny Comino islands before descending over Malta, the main island in the group. We flew right over Mosta with its huge domed Church of St Mary. The next day I visited the church, during WW II a German bomb fell right through the dome during a service, but failed to explode and there were no injuries. 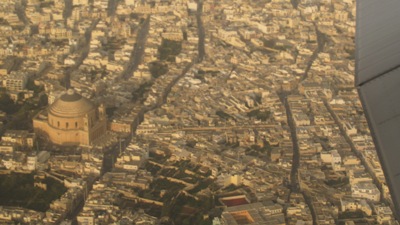 From Malta we flew via the Greek island of Crete and on to Cairo in Egypt. As we taxied out at Cairo airport I photographed this interesting reflection in one of our aircraft’s propeller spinners. 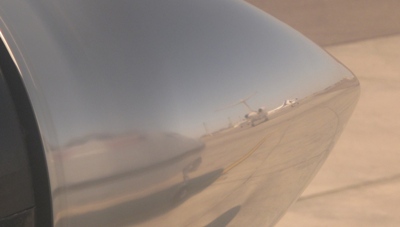 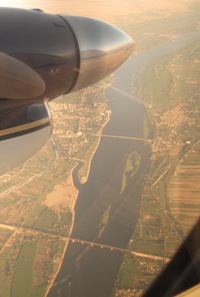 Climbing out of Cairo I was surprised how you could see the Nile on the east side of the aircraft and the Red Sea, seemingly only a stone’s throw to the west. We flew over spectacularly dry and rocky deserts and mountains then descended over the green Nile-side strip into Luxor.

Departing Luxor it was desert and mountains again to the Red Sea, with resorts dotting the coast to the north and south as we crossed the coastline.

Across the Red Sea we flew over desert and desert and more desert as we crossed Saudi Arabia en route to Riyadh. The green circles of centrepoint irrigation fields are a reminder that even a desert can turn out crops, if you’re willing to pour enough money on it.

After a refuelling stop in Riyadh we continued east to the Arabian Gulf (it would have been the Persian Gulf if we’d come from the other direction) and then turned south over Bahrain and along the east coast of Qatar before descending over Abu Dhabi and the United Arab Emirates into Muscat in Oman. 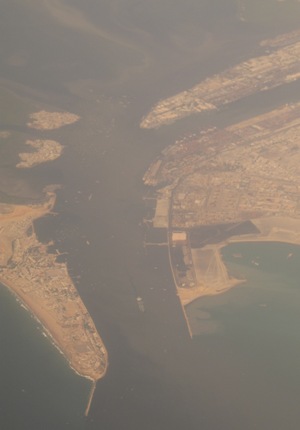 After our Oman stop the flight continued to India, passing almost overhead Karachi. I lived in Karachi for 5 years as a small child and could identify the harbour and Manora Beach down below. 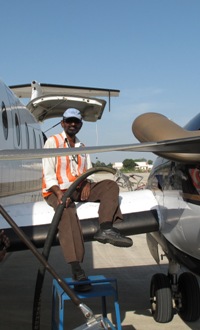 We stopped in Ahmedabad in the Indian state of Gujarat long enough to complete entry formalities and refuel.

Next stop was Agra and then Khajuraho where we had to shift these goats aside on our way into the terminal when we departed.
▼ 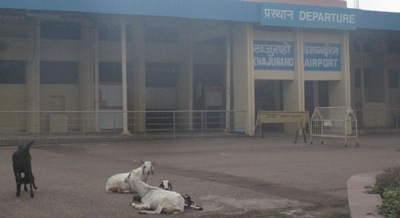 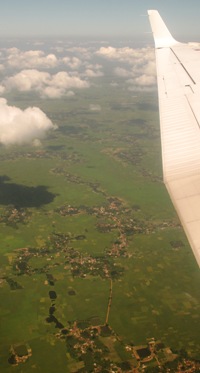 It was beautiful for the last 15 minutes into Calcutta, the monsoon was not long over and everything was green, lush and very tidy looking from up above.

From Calcutta we flew over Bangladesh, crossing the Sundarbans, the huge mangrove swamp which is home to the Royal Bengal Tiger. Then it was over a corner of the Bay of Bengal before crossing the coast almost directly over Chittagong. We could see Bangladesh’s second largest city and the mighty Karnaphuli River just to the north while just to the south was this great view of the winding Sangu River. 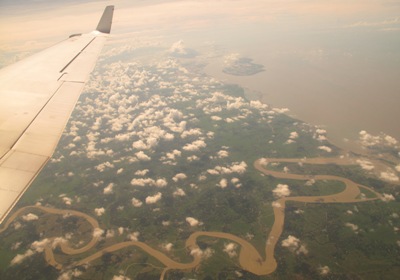 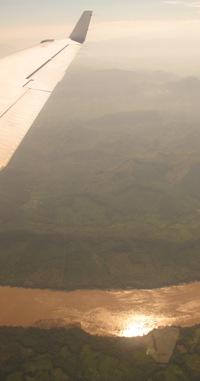 Then we didn’t get to see much of Burma, we’d no sooner crossed the border and it clouded in and remained that way for the rest of the way to Chiang Mai. It was the only real spell of bad visibility for the whole month-long trip and a pity because I’d hoped to catch a glimpse of the country’s crazy new capital city Nay Pyi Daw. The weather cleared only as we arrived over Chiang Mai, the main city of northern Thailand. The next day we continued to Luang Prabang, meeting the Mekong River and following it right in to the main city of northern Laos.

A new airport further from the centre is on the drawing boards, but meanwhile flights in to Luang Prabang usually pass right over the town, with the pagoda atop Phu Si Hill off to one side. Back in 1974 Maureen and I visited Luang Prabang, arriving on a Royal Air Lao DC4 and departing on a DC3 from the same airline. We sat up by the pagoda and watched planes come in on that visit. 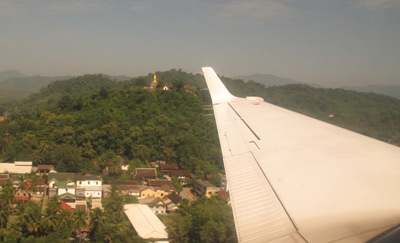 From Luang Prabang we flew to Bangkok, then Bangkok to Singapore and Singapore to Yogyakarta. We dodged Mt Merapi on our approach in to Yogyakarta and the volcano actually erupted that evening while we were at Borobodur, only 20km to the south. The eruptions have been much worse in the following two weeks and at times Yogyakarta Airport has been closed. From Yogya we made the last flight of the trip, down to Mataram on Lombok Island, passing just to the north of Bali with this view of Mt Agung poking up through the clouds. 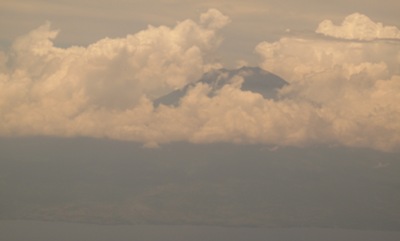 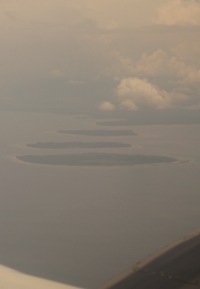 Finally we passed the Gili Islands on our approach to Mataram. That was the end of our trip although it was supposed to have continued on to Darwin in Australia’s Northern Territory. Instead Maureen and I flew on regular commercial flights to Bali from Lombok and then from Bali back to Melbourne.

Our aircraft was a chartered Malaysian Beechcraft 1900D. There were 11 of us on board including the crew.
▼