It’s my annual look back at the year’s travels. This year I started with Museums & Galleries, moved on to Cars & Bikes, then Animals & Wildlife, followed by Big Buddhas, 10 Books, Beaches, Aerial Views, Music and Weird Sightings, Great Signs.

I’ll conclude my look back at 2010 with 14 photographs in no particular order that sum up the year’s travel experience. 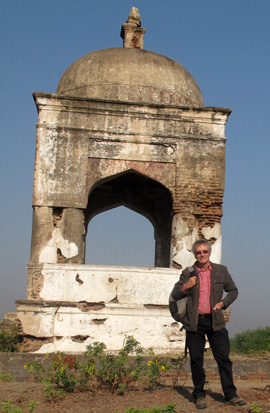 ◄ January – If there was a single travel highlight for the year this was the moment. It’s outside the town of Surat in the Indian state of Gujarat and I’ve just tracked down the ‘tomb’ of English traveller Thomas Coryate. He was one of the first ‘tourists’ and you can even say he invented the idea of a travel book. He walked to India in the early 1600s and during 2010 I followed Mr Coryate from his birthplace in England to the place where he died in India. In the next week or two I’ll post the sad story of Thomas Coryate and how I’ve intersected with it over the years. Meanwhile click here for a Thomas Coryate talk I made at the Wheeler Centre in Melbourne. 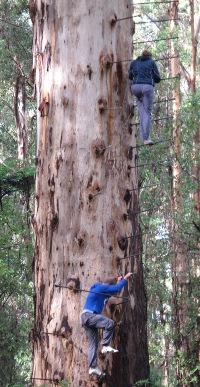 May – Like this couple I climbed up the spikes driven into the 60-metre-high Gloucester Tree, a towering karri tree near Pemberton in Western Australia. Every stop of the way I was thinking, ‘wow, they let you do this, lots of places in the world would be banning climbers at the first step!’ ►

October – Although I visited 22 countries during 2010 there was only one – Malta – which I hadn’t been to before! I was pleasantly surprised what an interesting place it was, particularly the capital Valletta. I”ll have to go back. This is the harbour at Valletta. ▼ 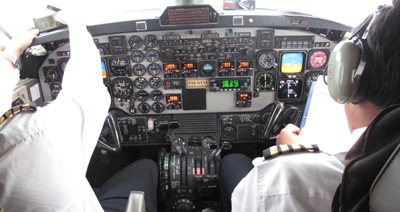 ▲ October – We flew from Biggin Hill (just outside London) to Lombok (in Indonesia) in a Malaysian Beechcraft 1900D, an interesting trip recreating the old multi-stop ‘Kangaroo Route’ between the UK and Australia. It was a step back to the era when you could spend time in the cockpit, there was no door in this small aircraft. I also spent lots of timing tracking our route with the aviation charts.

▲ January – The Jaipur Literary Festival in India has to be one of the best in the world. My session was a conversation with William Dalrymple, but I really enjoyed this one with assorted Scots – Niall Ferguson, William Dalrymple, Alexander McCall Smith and Andrew O’Hagan bantering over Scotland’s possible position as – according to Ferguson – ‘the Belarus of Western Europe.’ The final hoot comes from Ferguson who answers an Indian enquiry about what Scotsmen really wear under their kilt with a tale of playing football in a kilt. Tripped en route to the goal he goes kilt over sporran to a spectator’s cry of ‘great tackle.’ A double entendre much appreciated by the predominantly Indian audience. 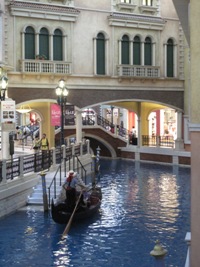 ◄ June – Yeah it looks like Venice at first glance, but it’s a total fake, it’s the ‘canal’ in the Venetian Hotel, a giant casino complex in Macau. I was speaking at a hotel conference – check my 10 Things I Hate in Hotels blog.

August – I jumped on my new bicycle, rode down the road from my place in London and four days later I was in Paris. Great trip! I just loved the idea that I could cross the Thames by Big Ben and then cross the Seine to the Eiffel Tower, here’s my bike with the French tower in the background. ▼ 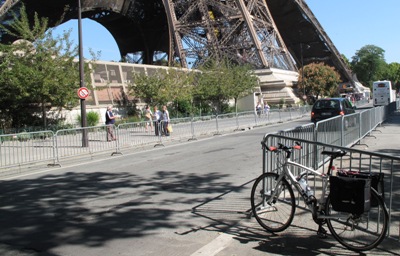 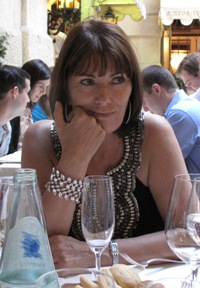 August – Well she’s my favourite travel companion and sparkling as usual in a restaurant in Italy. Maureen and I  were there with four friends for the Verona Opera Festival. You don’t even have to be an opera fan to be knocked out by this Italian musical extravaganza. ►

.
March – This cheerful (and tightly packed) band of pilgrims/tourists turned up while we were visiting the gigantic Bodhi Tataung Buddha figures near Monywa in Burma. ▼ 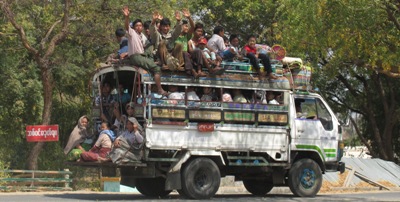 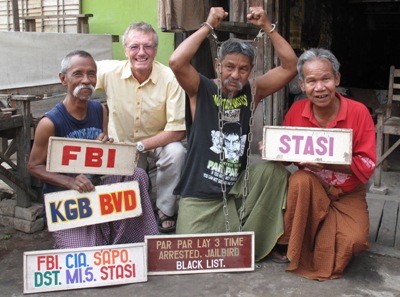 ▲ That was only one of many great moments during that Burma trip but for me a real highlight was meeting up again with the Moustache Brothers comedy troupe in Mandalay. 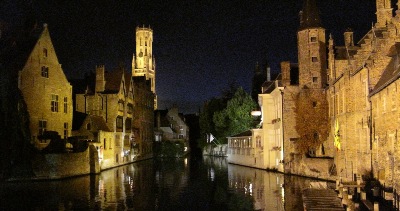 ▲ August – We rode the Eurostar from London to Brussels and continued on to Bruges, having watched the movie In Bruges the night before. Even rain couldn’t disguise what a thoroughly delightful city this is, so what if Colin Farrell hates the place in the movie? We stayed in the Hotel Relais Bourgondisch Cruyce, the hotel which features in the film, even though we’d booked it before we saw the movie and didn’t realize the connection. 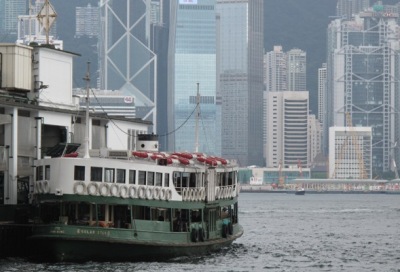 ▲ June – I don’t think I’ve ever visited Hong Kong without making that magical trip across the harbor on the Star Ferry. My 2010 visit after Macau was no exception. 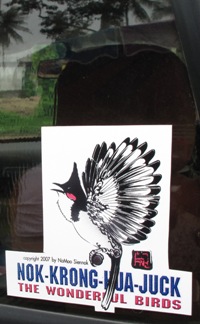 ◄ July – Driving around the Thai island of Ko Samui I chanced upon a bird singing contest. Hundreds of Nok Hong Krua Juck (red-whiskered bulbuls) cages were lined up and their expert owners clustered around the outside listening for whatever makes a truly great bird song.

October – Right at the end of our multi-stop London to Lombok flight we stopped in Yogyakarta in Indonesia and visited Borobodur for the first time in many years. This great Buddhist monument was as magical as ever and encountering a visiting group of Burmese monks was the final perfect touch. ▼ 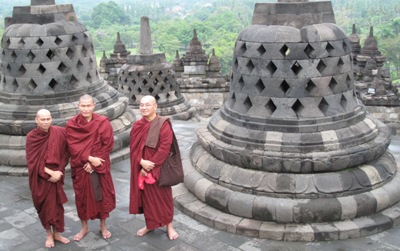