The Year of Magical Thinking: 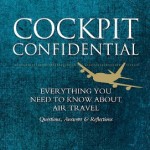 Patrick Smith’s Ask the Pilot was “everything you need to know about flying before you click the ‘book now’ button. “ Now he’s followed it up with Cockpit Confidential:  more questions, more answers, but equally important more reflections. Patrick may be a hard-nosed ...

A couple of weeks ago in London I saw the play (a solo performance by Vanessa Redgrave) of Joan Didion’s magical book The Year of Magical Thinking, in which she notes ‘the most beautiful things I had ever seen had all been seen from airplanes.’ Less than two weeks ...