A couple of weeks ago in London I saw the play (a solo performance by Vanessa Redgrave) of Joan Didion’s magical book The Year of Magical Thinking, in which she notes ‘the most beautiful things I had ever seen had all been seen from airplanes.’

Less than two weeks later, on Sunday 22 June to be precise, I had a magical view of Hong Kong as I flew on Qantas flight QF30 from London. 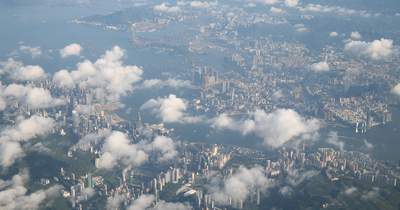 We came in over Macau, crossed the mouth of the Pearl River, flew by the south side of Lantau Island (the airport is on the north side) and then skirted the southern side of Hong Kong Island. This view is from above Hong Kong Island, looking across the island and Hong Kong Harbour to Kowloon and the New Territories beyond.

We flew directly overhead classy Repulse Bay on the south side of Hong Kong Island. 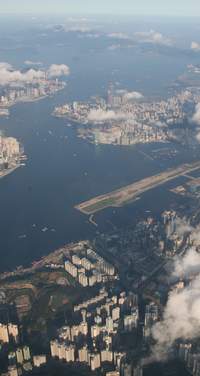 Looking straight down Hong Kong Harbour towards Lantau Island where we’ll be landing in a few minutes at the new airport. Clearly in view below is the famous old Kai Tak  (famous for its white knuckle approaches over the Kowloon buildings). It’s been 10 years since the airport closed and the site has still not been redeveloped.