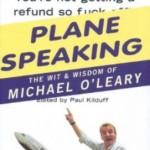 Flights that get diverted and end up somewhere unintended are always a pain in the neck. I’ve had a few over the years including one last year – it was my very first flight on a double-decker Airbus A380 and Qantas managed to take me from Los Angeles to Sydney instead...

Ryanair – and the romance of air travel

I finally got around to flying Ryanair. I’ve flown on assorted LCCs – Low Cost Carriers – but never had a reason to get on the European airline which generates all the bad publicity. Michael O’Leary, the airline’s outspoken boss, specialises in being controversial...