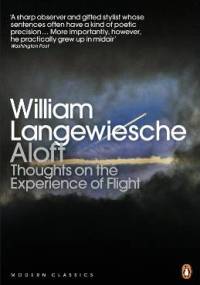 Two books on flying and airlines – I’ve just read Aloft, a collection of pieces by William Langewiesche which originally appeared in Atlantic Monthly or Vanity Fair. They include several of his classic analyses of aviation disasters – including the Colombia space shuttle – and musings on flying and weather. I posted recently on his book Fly by Wire, on the US Airways landing in the Hudson River. At the other extreme I zipped through Plane Speaking, accurately subtitled ‘The Wit & Wisdom of Michael O’Leary’. He’s the much loved or much hated, depending on your view, CEO of low cost carrier Ryanair. Here’s an airline spokesperson ready not to just throw political correctness out the window, but to positively eject it:

• Nobody wants to sit beside a really fat bugger on board. We have been frankly astonished at the number of customers who don’t only want to tax fat people but torture them.

Some of his comments make eminent sense to me:

• Air marshals are a complete waste of time. I can’t think of anything that would reduce security more than having a guy on board with a gun.

Too true, I don’t want to fly any airline with a gunman (or woman) on board. So I avoid US airlines wherever possible.

I flew Ryanair to Sweden a couple of weeks ago and they were fine, although they can certainly be loose with the truth – it’s no trick to be good at not losing bags when you work so hard at discouraging passengers from ever checking a bag and never move a  bag from one flight to another.

• When we used air-bridges we found that they were the 4th largest cause of delays. If it’s raining passengers will just walk a little faster.
• Ryanair will never fly the Atlantic route because one cannot get there in a Boeing 737, unless one has a very strong tail wind or passengers who can swim the last hour of the flight.
• Three dumb bastards decided they’re not going to go to the gate on time. It takes us twice as long to get their bags out of the hold. They should be strung up.
• Anyone who thinks Ryanair flights are some sort of bastion of sanctity where you can contemplate your navel is wrong. We already bombard you with as many in-flight announcements and trolleys as we can. Anyone who looks like sleeping, we wake them up to sell them things.
• We don’t have the widest seats and you’re not getting any free food on board. Bugger off.
• Our customer service is about the most well-defined in the world. We guarantee to give you the lowest airfare. You get a safe flight. You normally get an on-time flight. That’s the package. We don’t and won’t give you anything more on top of that. We care for our customers in the most fundamental way possible, we don’t screw them every time we fly them. Did you get that service? Yes, you did? Fine. Shut up and go away.
• Do we carry rich people on our flights? Yes, I flew on one this morning and I’m very rich.