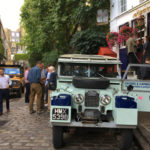 ◄ Back in 1955, so 64 years ago, two Land-Rovers from Oxford and Cambridge Universities set out from The Grenadier pub in London’s Belgravia district, not too far from Harrods and Harvey Nicks, to drive to Singapore. That turned into a TV programme and a classic trave...

◄ I didn’t see all the big five (elephant, rhino, buffalo, lion, leopard), but leopard was the only one missing on my brief visit to Zimbabwe. In other countries in Africa the rules are that you must stay (safely) in your vehicle. In Zimbabwe if you want to get out an...