◄ I didn’t see all the big five (elephant, rhino, buffalo, lion, leopard), but leopard was the only one missing on my brief visit to Zimbabwe. In other countries in Africa the rules are that you must stay (safely) in your vehicle. In Zimbabwe if you want to get out and walk, well it’s your life. Craig Van Zyl, my expert guide, did tote a big gun and we had some great encounters:

The Bulawayo-Victoria Falls railway line forms the eastern boundary of Hwange National Park. We were staying at Davison Camp, over on the eastern side of the park and Craig suggested we take a little stroll over to the line. As we got closer we could hear a train coming and rushed through the bush to see it pass. When we got to the line we discovered we weren’t the only one racing there: ▼ 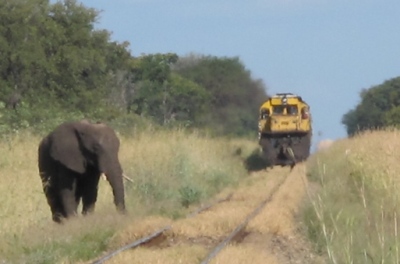 The train hooted, the elephant thought about it … and retreated.  ▼

Hwange has one of the biggest elephant concentrations in Africa so there were plenty of other elephant encounters during our stay. In fact I could watch elephants at the water hole in front of the camp from my room verandah, or even from bed. My favourite elephant encounter, however, was on the shores of Lake Kariba at the Rhino Safari Camp. We’d been watching these three young bulls cavorting around in the water, splashing each other, rolling around or swimming along in line, trunks up as if they were snorkelling. They were clearly enjoying themselves. One of them finally came ashore and was a bit shocked to find us sitting on the beach, there was an angry harrumph, a mini charge and then he veered off into the bush nervously. ▼

My rhino encounter was also made – appropriately enough – from the Rhino Safari Camp. Craig spotted the black rhino and we jumped across a stream, shuttled across a field, bent over to keep low, and took up station behind a fallen tree. We were only a stone’s throw away from the rhino on the other side of another stream, but it was completely oblivious to us, feeding steadily along the banks of the river. It was green and lush, an absolutely bucolic sight. Eventually it wandered downstream and off into the bush, but it was a great encounter. The camp’s rhino information folder says that if you’re charged by a rhino ‘the best defense is to find a tree to climb. It is amazing how adrenalin can take you places you would never have thought you could get to!’ Yes.  ▼ 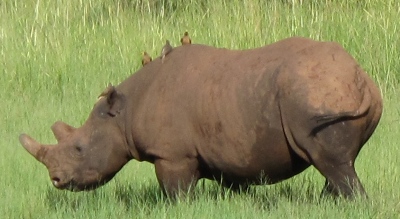 It doesn’t have to be big stuff, there’s plenty of much smaller animal and birdlife to keep you interested. Like the ox pickers – tick birds which ride around on giraffes, buffalo, rhino and other larger animals and work as an extra pair of eyes. ‘Hey there, look there’s a human, move away from the road, can’t you see them in that Land-Rover? Come on, move!’ Not good from our point of view.  ▼

And there’s some wildlife which you can get out, pick up and shift off the road just in case the next Land-Rover came along too fast. This leopard tortoise (from the shell pattern) waddled away in true tortoise fashion. ‘Probably about 50 years old,’ Craig suggested. ▼ 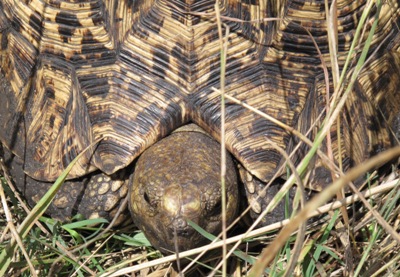 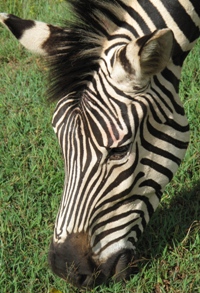 ◄  My Zimbabwe travels finished with a foray into the Vumba Mountains on the border with Mozambique. At the rather swish Leopard Rock Hotel, Newton, the hotel’s game park guide, took me for an interesting and talkative stroll around the park. The park has three giraffes, 13 zebra (one of them rather tame, having wandered off when it was young and lived with cattle, before returning to the park), plus wildebeest, eland, impala, bushbuck, blue duicker and others, but it was Newton’s talk of African life which made it a memorable morning.