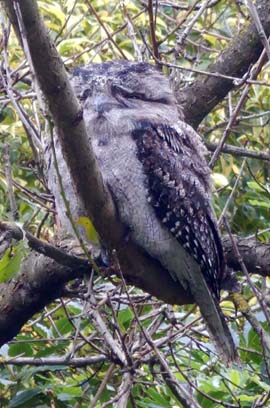 Glaring resolutely down at me from a tree just across the fence from my backyard was what I took at first to be an owl. In fact it was a tawny frogmouth. The next day it had moved to a different perch and was still keeping a close eye on me, but now accompanied by a second slightly smaller bird. This pair of tawny frogmouths had no sooner appeared in that handy viewing tree than an article – What Australian birds can teach us about choosing a partner and making it last – appeared in The Conversation.

Birds have a variety of approaches to ‘reproductive strategy’ and Australia has one of the most famous examples of the meet-mate-depart strategy, the bowerbird. 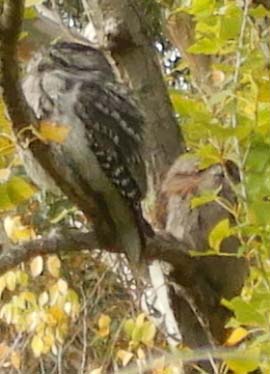 ◄ A pair of tawny frogmouths

Most birds, however, take on a longer term approach. Sometimes just for one season, but more often for much longer. Only 5% of mammals, including humans, ‘pair up and raise kids together,’ but worldwide 90% of birds do and in Australia pairing up often means for life. Parrots are particularly keen on life-time commitment. Gisela Kaplan’s Conversation article notes that birds making long-term commitments are more intelligent and live longer. Some Australian birds live up to four times as long as their northern hemisphere counterparts. Click here or here for blogs on my encounters with cockatoos, a favourite Australia bird particularly noted for making long term commitments. 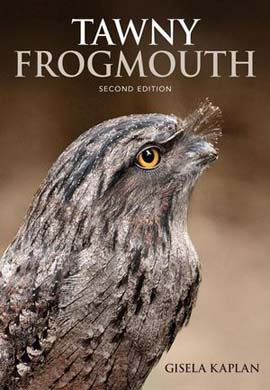 Tawny frogmouths are fine examples of the long term faithful policy and my new neighbours and Gisela Kaplan’s article led me to her book Tawny Frogmouth and a lot more understanding about these interesting birds. For a start, despite their owl-like appearance they are not owls. They are nocturnal, but not exclusively so and in fact their favourite time of day is twilight. They are found throughout Australia and seem to get on very well with humans. That is they’re not bothered by our presence and, like my pair, will happily move in right next door and keep an eye on you