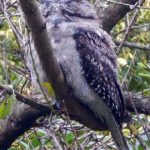 Glaring resolutely down at me from a tree just across the fence from my backyard was what I took at first to be an owl. In fact it was a tawny frogmouth. The next day it had moved to a different perch and was still keeping a close eye on me, but now accompanied by a s... 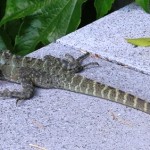 Usually around this time of year a bird nests in my house’s courtyard, it’s been blackbirds (which are not a native Australian bird) these past couple of years. They’re often nesting in October and sometimes raise more than one brood. One year I noted the chicks’ depa...

I don’t have to go far to see the wildlife – feathered variety at least – at this time of year. They come up to my study windows, I can watch them as I type this. For the past month we’ve had an angry magpie attacking its reflection in windows all around the hous...