Amy Gillett was an Australian athlete – she rowed for Australia in the 1996 Olympics in the USA before switching to cycling. She was tragically killed in a training accident in Germany in 2005. Named after her the Amy Gillett foundation works for cycling safety in Australia and is currently running a fundraising page promotion 15 years after her death, I’ve put some money in.

I’ve never looked upon myself as a really committed cyclist – despite which I’ve got a number of bicycles, I’ve even got one I keep in London, and even if it’s only zipping out to the supermarket I probably ride somewhere every day. I’ve also got on a bike in a lot of countries, just a few happy international (and local) bike rides:

• Of course I’ve done the Round the Bay circuit in Melbourne – that was on my Bianchi which I really don’t use often enough. I’ve joined in an Amy Gillett 120km ride on the Bellarine Peninsula once.
• I took my bike – the Wheeler mountain bike – to Tanzania in Africa and joined the annual Tour d’Afrique bike ride for two weeks. That took me down to Lilongwe, the capital of Malawi. I’ve also taken that bike to French Polynesia and rode it over the top of Tahiti and around the coast of Moorea. I’ve ridden it in Melbourne this morning.
• I jumped on my London bicycle – a Specialized – and rode it from London to Paris, a really nice three day ride and then I raced back on the Eurostar 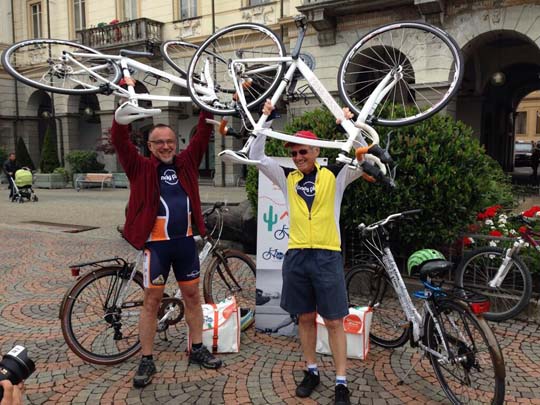 ▲ In 2014 an Italian book publishers association organized Il giro d’Italia in 80 librerie – the Tour of Italy to 80 bookshops – and I joined in for a day. A downhill day in the Alps. That’s Angelo Pittro of EDT (Lonely Planet Italy) and me at the start of the day’s ride from Aosta to Ivrea.

• I’m a big enthusiast for the bike rental schemes that have popped up all over the world – shame it never really worked in Melbourne. In London I’ve even got a ‘key’ for the London Transport (aka Boris Bikes, aka Sadiq Cycles) scheme so I don’t have to log in every time. I’ve also tried the local schemes in Copenhagen, Paris, New York City, San Francisco, Shanghai, Beijing and assorted other cities and over the years I’ve rented and rode bicycles in more cities than I care to remember, particularly in Italy, India, Japan and China. 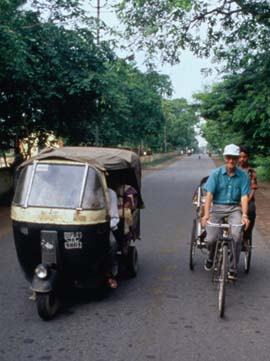 • Sometimes I haven’t even done the pedaling, of course I’ve been on bicycle rickshaws in lots of countries – and written a book, Chasing Rickshaws, about them – but in some place you just hop on the carrier on the back and somebody pedals you to your destination.

◄ Me, pedaling a bicycle rickshaw in Agra in India