Souvenirs are an important part of travel and over the years I’ve bought some truly terrible souvenirs. Most of them, I’m glad to say, precisely because they were truly terrible. You know the process: ‘Oh my God, that is absolutely awful. I must buy it.’ Most of my really dreadful snowdomes fit into that category, but snowdomes are easy. They’re designed to be kitsch, tasteless, naff. They’re the perfect souvenir – cheap, nicely ironic and an instant reminder of wherever (camels plus skyscrapers in a snowstorm equals Dubai, of course). 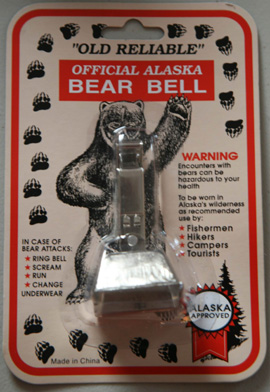 ◄ A truly horrific souvenir should come from a little further left field. Like my Official Alaska Bear Bell. Costing all of $2.25, it came with the handy warning that: encounters with bears can be hazardous to your health. Well yes, but is any half-ton grizzly going to hear the gentle tinkle of the bell you’ve clipped on to your Gore-Tex jacket and think, ‘Oh, human approaching, I must clear off the track’? Still the instructions for what to do in case of attack were memorable: ring bell, scream, run, change underwear.

‘We call them dinner bells,’ an Alaskan told me. ‘You ring the bell, the bear comes to eat you.’ I posted on my Alaskan bear encounters back in 2009.

A really good souvenir should be unexpected and it’s even better – for later conversation at least – if it’s also totally unsuitable to travel with. Like my stammtisch. You’ve never brought a stammtisch back from Germany? Shame on you. I acquired mine in Berlin. ‘We’ll get the beers, you grab a table,’ my German friends told me. ‘No, not that table,’ they complained a few minutes later. ‘That’s the stammtisch,’ they added, explaining that any bar of sufficient age and history would have a ‘root table,’ a table specifically reserved for the pub’s old timers. OK, so not quite old timers, what they actually said was ‘old farts’. And anyone could see I was sitting at the stammtisch – I was facing a large, ornate, wrought-iron ashtray with stammtisch emblazoned across the top. So that was why I was pulled aside just before my flight departed and asked to identify my checked bag and explain what on earth that large weird shape was that had shown up on the X-rays. My friends had decided I needed to take a stammtisch ashtray home and sent me off with 5kg of iron. 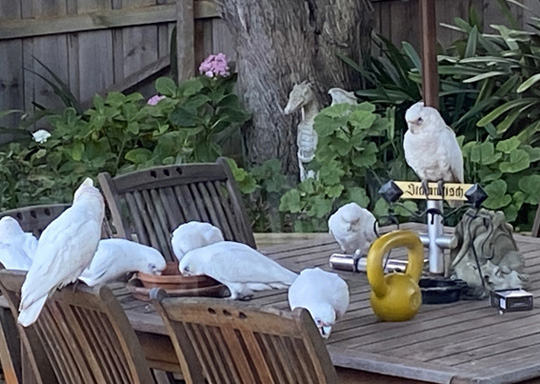 ▲ Yesterday I got a reminder that it was still around, now providing a suitable perching spot for a visiting cockatoo in her Melbourne back yard. Presumably that’s the local cockies’ ‘root table.’ 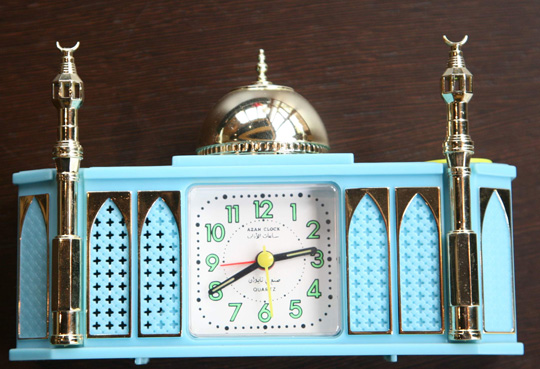 ▲ As a combination of kitsch and practicality there’s nothing to beat the souvenir I brought back from a bazaar in Muscat, the capital of Oman. Dive into any good souq around the Gulf – Dubai, Bahrain, Kuwait, any of them will do – and you’ll soon come across that perfect combination of regional reminder, usefulness and sheer bad taste: the mosque-shaped alarm. Set the appointed hour and next morning you’ll be jolted out of bed by the call to prayer right in your ear.

I’ve also posted in recent years about Dutch and French explorers souveniring reminders of their travels from Dirk Hartog Island off the coast of Western Australia and taking them back to Amsterdam or Paris. And a post on turning out ‘genuine Australian boomerangs’ in Bali, that post went on to question where BMWs came from (not necessarily Munich) or Boeing 787 Dreamliners (all over the world before final assembly).