After my BMW visit to China in March I was invited to visit BMW’s headquarters in Munich, have a look around and find out about their new BMW i sub-brand for electric and hybrid cars which will launch in 2013. I’ve already got a hybrid car, a Toyota Prius, but to get in the electric car mood I turned up in Munich from Switzerland where I had spent two days driving up and down Swiss mountain passes in a Tesla electric car.

My Munich visit included a look at BMW Welt (BMW World) which combines some BMW history with a very fancy BMW showroom where customers can pick up their new cars fresh from the assembly line. Amazingly BMW World has become the biggest tourist attraction in Bavaria. 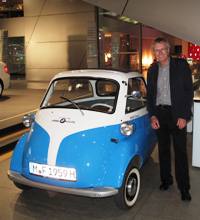 ◄ That’s a BMW? Yes, in the ‘50s BMW produced these tiny BMW-Isetta bubble cars. They never sold that well and BMW was heading towards bankruptcy (or selling out to Mercedes at one stage) until they turned the company around.

BMW Classic is more an enthusiast’s garage (but a big one) than a museum, a wonderful jumble of historic BMW cars and motorcycles, one-offs, limited production and experimental vehicles, racing cars and motorcycles and even movie BMWs like the BMW 750i from the James Bond film Tomorrow Never Dies.

Remember the scene where Bond (Pierce Brosnan) races the empty car around a car park using a hand-held remote control? Well the reality was there was a stunt driver squeezed down behind the front seat, using a TV screen to see where he was going. ▼ 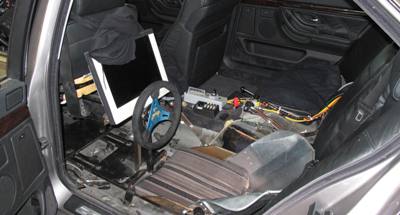 Of course I did some sightseeing around the Bavarian capital, following the Lonely Planet walking guide around the city centre, including to the top of the St Peterskirche tower to look down on the Rathaus (Town Hall) in Marienbadplatz, the town centre of Munich. ▼ 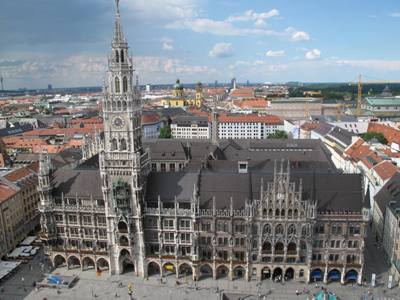 My favourite Munich spot is the surfers’ hangout beside the Haus der Kunst (Art Gallery) at the southern end of the Englischer Garten (English Garden). A little waterfall on the Eisbach stream through the garden provides a perfect surf break, I’m sure lots of travelling surfers must want to say ‘oh I rode a few breaks in Munich.’ ▼ 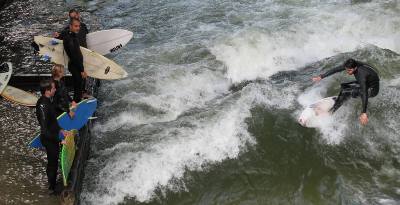 I also watched new BMWs come down the assembly line. As the bodies move from one paint process to the next they’re dusted off with the very best BMW-standard feather dusters – emu feather dusters. ‘So you get your feathers from Australia?’ I asked. ‘No, BMW have an emu ranch in Bavaria.’