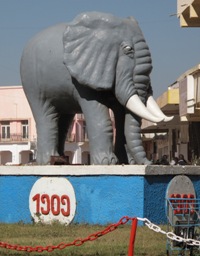 Improved peace and security and lots of work on roads has started, slowly, to turn the Congo DRC around and a very small sprinkling of travellers are starting to explore this extraordinary country. Check postings on the Thorn Tree for some of the amazing routes trail blazers have forged. Read this one for a Kinshasa to Lubumbashi endurance test.

My first stop was Lubumbashi, down in the south-east of the country and just a stone’s throw from Zambia. I arrived in Lubumbashi from Nairobi in Kenya partly because I reckoned it would be an easier entry point than big bad Kinshasa, the county’s capital. 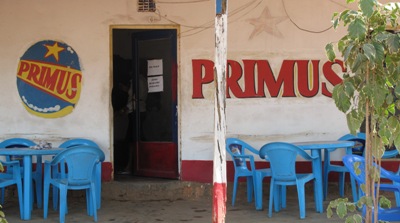 ▲ Primus is the beer of Congo, since it comes in 730 ml bottles you need a serious thirst before calling for another beer.

The town was Elisabethville in the Belgian Congo era and it was a totally Belgian creation, there was no town here before the Belgians made it the centre of their mining operations. In the chaos following Congo’s independence Lubumbashi was the centre of the breakaway Katanga Province under local hero Moise Tshombe. It was a revolt supported by the Belgians since they saw it as a way to keep their economic interests alive. Lubumbashi was also the place where the independent Congo’s first president Patrice Lumbumba was killed in 1961. He was handed over to Tshombe by Mobutu, who would then rule the country until close to the end of the century. So there’s some history in the town.

▼ An alternative claimant for the town centre, this fountain fronting a statue of Moise Tshombe. 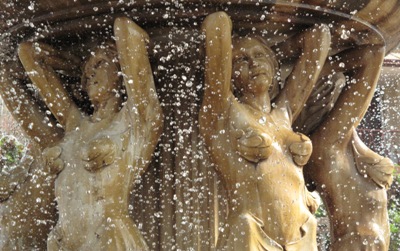 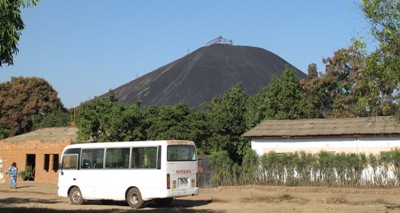 ▲ Mt Lubumbashi dominates the town, but it’s a totally artificial creation. It’s the mine tailings, a mountain-sized reminder of a century of very active mining. Katanga Province even supplied the uranium used in the first atomic bombs dropped on Japan.

I could work on my deportment while I’m in the Congo, you regularly see women gracefully toting loads like this huge bowl of bananas. Men also carry loads balanced on their heads although less frequently than women. Crates of eggs seem to be a male head-balancing speciality. ►