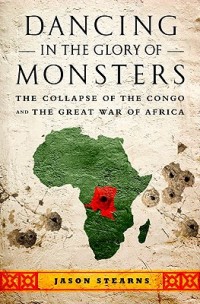 Jason Stearns’ book Dancing in the Glory of Monsters tries to unpick the story of ‘The Collapse of the Congo and the Great War of Africa.’ Clearly a near impossible task, because you’re still left fairly bemused at the end how all these events – from the Cold War to the Rwanda genocide – could come together so disastrously. Let’s try and summarise the Congo story in 7 dated bullet points:

• 1885 – King Leopold II of Belgium grabs the Congo as his personal colony, proceeds to exploit it mercilessly. You thought chopping hands off was a horror story out of Sierra Leone in the late 1990s? No, it was a Belgian invention in the Congo.
• 1908 – Belgium takes over the colony from the king, it becomes the Belgian Congo.
• 1960 – Congo gains independence, but there are only 16 university graduates in the whole country and the newly independent country soon falls apart. Patrice Lumumba, the first Prime Minister, is killed within a year, his shooting observed by Belgian officers.
• 1965 – Joseph Mobutu comes out on top at the end of the ‘Congo Crisis.’ For the next 30 years he leads Zaire, as he renames the country, on an economically downhill path until with the end of the Cold War he’s no longer needed as an anti-Soviet friend of the west. No more Concorde charters for Mr Mobutu.
• 1994 – the Rwanda genocide kills 800,000 Tutsis and moderate Hutus, the ‘génocidaires’ are driven out of Rwanda and into Congo by the army of the RPF, the Rwanda Patriotic Front.
• 1996 – the First Congo War kicks off as the Rwandan Army and  the Congolese revolutionary force, the ADFL, march into Congo on a mission to confront the génocidaires and overthrow Mobutu. The ailing Mobutu flees to Morocco, Laurent Kabila becomes the new president, renames the country the DRC, Democratic Republic of Congo, and soon proves as economically inept as Mobutu.
• 1998 – the Second Congo War kicks off when his Rwandan supporters get fed up with him. The ‘Great War of Africa’ officially ends in 2003, but its aftermath grinds on. Total deaths – mainly civilians – have topped 5 million in a struggle which sucked in 8 countries and around 25 armed groups. Meanwhile Kabila was assassinated by a bodyguard in 2001 and succeeded by his far more able son Joseph Kabila.

And the title of the book? Kabila accused the Congolese of all being Mobutists at some point: ‘We saw you all dancing in the glory of the monster.’