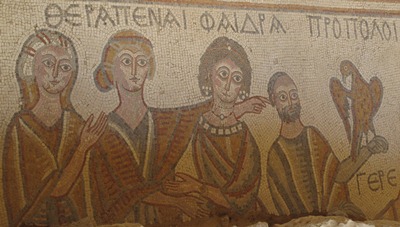 ▲ Mosaics in the Archaeological Park in the Jordanian town of Madaba.

I spent two weeks in Israel and Palestine just before Christmas 2011. You can check my reports on my travels in Palestine, the problems of Hebron, the Wall, an encouraging visit to Nazareth, the three walks I sampled in Israel & Palestine, a review of the ‘walking the wall’ book Extreme Rambling and even a report on a coffee at Stars & Bucks in Ramallah.

▲ The Dead Sea on my starboard side

On my way there I flew with Etihad from Melbourne in Australia via Abu Dhabi in the UAE to Amman in Jordan. I took a taxi from the airport to the Allenby Bridge and less than an hour after arriving in Jordan I’d left the country, en route to Palestine. Coming back, however, I flew straight from Tel Aviv to Amman – the flight is only 120km, you’re no sooner up in the air than you’re descending past the Dead Sea to the Jordanian capital. Then I had four hours to kill before checking in for my connection to Abu Dhabi. What to do? 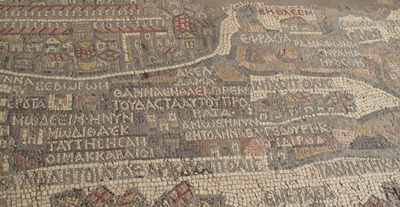 ▲ Have a look at Madaba was the wise advice the woman at the tourist office desk in the baggage claim area offered. I soon had a taxi driver for the half hour drive from the airport. I’ve always been a sucker for mosaics and Madaba is noted for its wonderful collection. The prime attraction is a mosaic map which spreads across the floor of St George’s Church, stretching from Jordan across the Holy Land to Egypt. Less than a third of it survives, but what does is fascinating. Equally curious is that I venture into the church, where a congregation is noisily performing, and can’t find the mosaic. Where is it? Answer, under the congregation’s feet, once they’re gone the carpets are rolled back to reveal the map. It dates from 560 AD, they can date it from Jerusalem buildings which are/aren’t present on the map.

As my taxi driver dropped me off outside the church he handed me a mobile phone! ‘It’s my spare phone,’ he explained, ‘parking here is impossible, just press call and I’ll come and collect you.’ A typical example of the polite and trusting approach which makes travel in the Arab world such a pleasure. 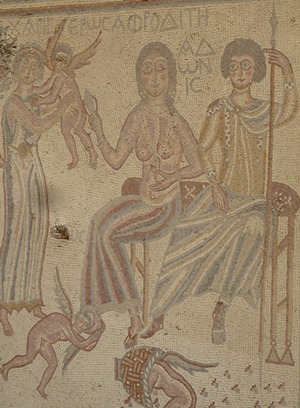 ◄ The nearby Archaeological Park has an assortment of wonderful mosaics. Like this one of a topless Aphrodite giving a misbehaving winged Eros a spank. From Madaba we continued a few more km to Mt Nebo, the place where Moses died (although God alone knows where he was buried, according to Deuteronomy), the views over the Dead Sea might be fabulous if it wasn’t so hazy and the mosaics here are, unfortunately, not on view because a new building to enclose them has been under construction for years and looks like taking quite a few more years to complete. From there we drove back through Madaba, stopped for a coffee and I got back in plenty of time for my flight.