The Roundabout Route to Rachel’s Tomb


And Rachel died, and was buried on the way to Ephrath, which is Bethlehem. And Jacob set a pillar upon her grave: that is the pillar of Rachel’s grave unto this day. — Genesis 35:19-20

It had to be one of the weirdest forays on my recent Israel and Palestine travels, a little visit to Rachel’s Tomb while I was in Bethlehem. It’s on the north side of the town, so between central Bethlehem and Jerusalem. Once upon a time you could stroll past the Intercontinental Hotel, walk a couple of hundred metres up the road and there it was on your left.

Today a loop of The Wall, the barrier between Israel and Palestine, wriggles its way south from Jerusalem and loops around the tomb to cut it off from Bethlehem and anchor it to Israel. 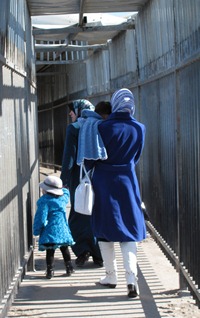 To visit the tomb I would have to leave Palestine and enter Israel. So I walked north alongside the wall and after a few turns found myself at the Bethlehem checkpoint. Like other checkpoints I saw it looked like something for managing cattle rather than human beings, but it was a quiet day and I was through the X-ray machines and metal detectors, my passport was given a cursory glance and I emerged in Israel. I then turned south and walked back the direction I had come for about a hundred metres to a military checkpoint.

To proceed further I would have to wait for a bus – a bulletproof bus according to some reports – but I managed to hitch a ride within a few minutes. I was soon outside Rachel’s Tomb – I’d better not say ‘a stone’s throw’ so ‘a tennis ball hit’ from where I’d started. I had a look at the tomb, hitched another ride back to the checkpoint, crossed back into Palestine, no passport checks or X-ray machines in this direction. And I was soon back in Bethlehem’s Manger Square. 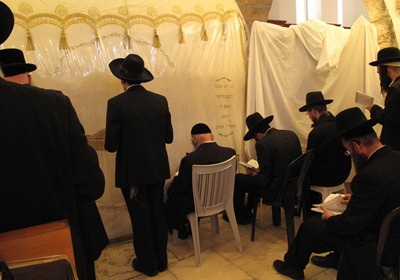 ▲ prayers at the tomb.

• I was allowed to visit, for most Palestinians the tomb is totally inaccessible. At times non-Jewish tourists have also been banned.
• I didn’t have to wear a kippa (skullcap) although I was offered one by a visitor.
• After I’d visited the tomb I tried to study my route to and from the tomb on Google Earth and discovered that the images are degraded, I can look at central Pyongyang in North Korea at much higher resolution than I can study Rachel’s Tomb! Credit that to the Kyl-Bingaman amendment which prohibits high resolution images of Israel. That may end when the Turks launch their Göktürk satellite in 2013.

I’ve put up quite a few recent blogs on my pre-Christmas travel around Israel and Palestine. You can check my reports on my travels in Palestine, the problems of Hebron, the Wall, an encouraging visit to Nazareth, the three walks I sampled in Israel & Palestine, a review of the ‘walking the wall’ book Extreme Rambling and even a report on a coffee at Stars & Bucks in Ramallah.