I’m not a dyed in the wool rail travel enthusiast, but I’m not averse to a good train trip and it’s remarkable how, when I do climb aboard I sometimes find Tim Richards – a real Australian railfan – is already there. Back in 2013 I finally got around to doing the Big Red Train Trip, the Trans-Siberian, although in fact I did the start-in-Beijing and cross-Mongolia-first Trans-Mongolian version. Sure enough, Tim was one of the Aussie passengers on board. 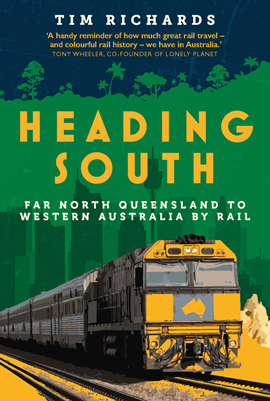 Now Tim’s put together a great Australian train trip and written about it in his new book Heading South. His long railway journey heads west as much as south, but it’s a handy reminder of just how much great rail travel – and colourful rail history – we have in Australia. Along the way he does the big one – Adelaide to Perth on the Indian Pacific – but also some of the unique shorter journeys, the crazy (how else could you describe them?) Gulflander and Savannahlander in far north Queensland and finally the short run on the Australind from Perth to his hometown of Bunbury in Western Australia. All the way it’s clear that this is a man in love with train travel, a true railfan.

Regular train travel in Australia is often not the best, services can be slow, uncomfortable and infrequent. It’s no surprise that getting from A to B – when you can that is, when the country is not in pandemic lockdown – it’s often easier to fly. Tim’s account of travelling on the XPT service between Sydney and Melbourne is unlikely to convince many people to travel by train. In February 2020, so just before the Covid-19 pandemic brought so much travel to a halt, I took the train from Adelaide to Melbourne. As long as you had plenty of time (it was slow) and chose the right day (it was infrequent), the trip was quite good fun.

Only a few months earlier, in late 2019, I took a much more interesting and comfortable train out of Adelaide. I was on the inaugural run of the Great Southern train service between Adelaide and Brisbane. The three day trip featured assorted excursions off the train – the Grampians, Canberra and the northern NSW coast – and guess who else was on board? Yes Tim Richards. Once the pandemic has retreated hopefully the Great Southern will resume running. 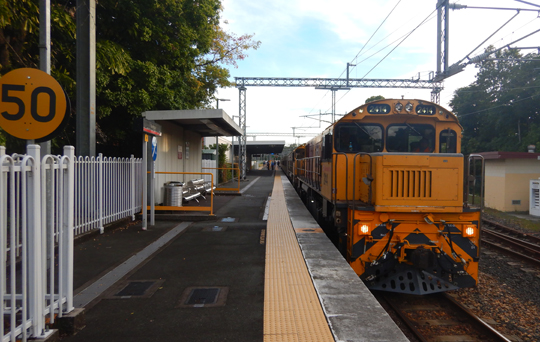 In the middle of the pandemic I did another surprisingly enjoyable Australian train ride, the 24 hour Spirit of the Outback trip from Brisbane to Longreach. Looking back on that trip in May 2021 it was a remarkably lucky excursion, a brief window of opportunity when Queensland was open, Melbourne and Sydney weren’t in lockdown. In Covid-constricted Australia the stars didn’t align like that too often. Right now I’m in England where train travel can work very well and can also be remarkably comfortable and convenient. In the last few weeks I’ve taken the train from Kings Lynn in Norfolk to London and then made a London-Newcastle-upon-Tyne-London excursion to northern England.