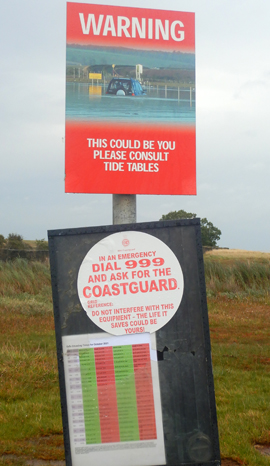 Having escaped Australia and flown from Melbourne via Singapore to London I’ve been doing some travel around England and further afield around assorted Greek Islands. There’s more European travel coming up before – hopefully – I manage to make my way back to Australia. In no particular order I’ll report on a few places I’ve been, starting with Lindisfarne Island, on the east coast of northern England, not far south of the border with Scotland.

The Holy Island covers just 2-square-miles (5-square-km) and dates back to St Aidan arriving here to found a monastery in 635 AD. Getting there is half the fun, the island is connected to the mainland by a causeway which floods over for about five hours a day. Get it wrong and your car could be washed away and the coastguard will have to come to your rescue. Despite tide timetables – posted and available online – it does happen.

▲ Lindisfarne causeway, waiting for the tide to go out.

We couldn’t find a room on the island so our plan was to cross as soon as the causeway opened – 145pm on that day – have a look around the island, have dinner at the Crown & Anchor, Lindisfarne’s favourite pub, and get back across the causeway before the tide came back in and swept our car away. So we took a train – a very comfortable LNER service – from London Kings Cross up to Newcastle-upon-Tyne, picked up a Fiat 500 rent-a-car from Europcar and drove up to Lindisfarne, arriving at 245pm to find the causeway still under water. So much for the tide timetables, we had to wait about an hour before we could drive across 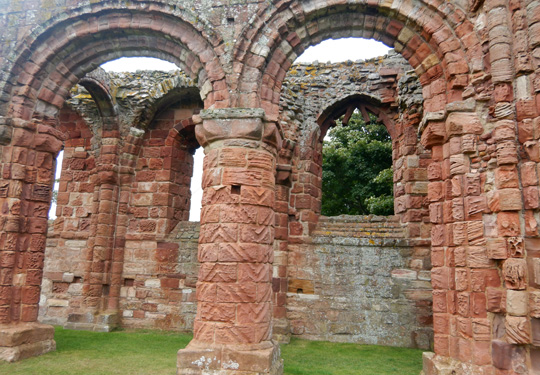 Our late arrival meant we had to hurry our sightseeing, but we still had time to explore the museum and learn about the repeated Viking raids between 793 and 875 before the monks retreated to the mainland, taking the illuminated Lindisfarne Gospels with them, it’s now one of the prize exhibits at the British Library in London. The monks returned and built the priory in the 11th century only for it to fall to Henry VIII’s Dissolution of the Monasteries in 1537. It’s the evocative ruins of the priory visitors see today.

Only 10 days earlier we’d seen The Mirror & the Light put on by the Royal Shakespeare Company in London. It’s part three of Hilary Mantel’s Thomas Cromwell trilogy and since it was the opening night she was in the audience, a few rows behind us. It was Cromwell who organised the dissolution for the king, but in the play his long relationship with Henry VIII hits the wall and as a result he meets the king’s executioner. 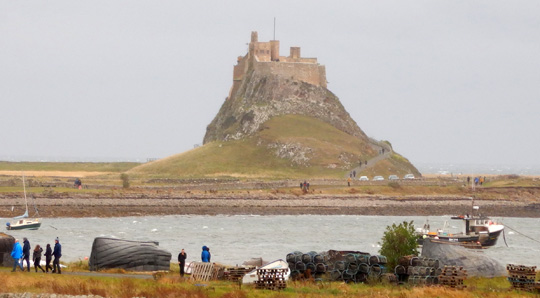 ▲ From the priory we walked out to Lindisfarne Castle, perched like the perfect fairytale retreat in 1550 on top of a rocky peak. From where we retreated back to the Crown & Anchor for dinner, perfect fish & chips Maureen announced. The pub featured an amazing number of dogs, there were two feisty white Yorkshire terriers under a table who took exception to every other dog that appeared. A young Alsatian was nonchalantly unconcerned about whatever was going on, a Chihuahua (well something small anyway) also appeared rather confidently unconcerned and there was something else under the bar, older and black, which was concerned, but quietly so, unlike the white terriers.

After our meal we had a small search for the village car park – in utter darkness on the edge of town – and for our car. Clearly nobody had ever thought of putting a light or two in the car park, which by now was completely empty, except for one Fiat 500. And we got back across the causeway before the tide came in.