The Hawkesbury River flows into the Pacific just north of Sydney, driving between Sydney and Newcastle the highway crosses the river close to its mouth. It’s a popular Sydney getaway for bushwalking, boating on the river and dining at restaurants like Peats Bite or the classy Berowra Waters Inn – A$545 per person for lunch, including the seaplane flight from Sydney. You can get there by boat. 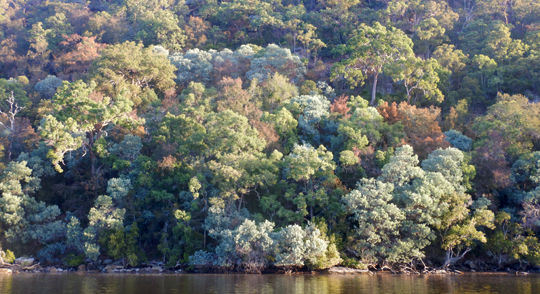 ‘There were fridges floating by and on out to sea,’ we were told, when severe floods hit the Hawkesbury in late March 2021. It had dried out by the time we got there in mid-April. 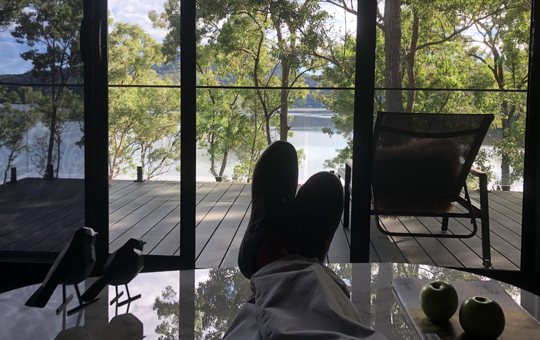 ▲ Time to put my feet up in our room in the Marramarra Lodge and gaze at the river. 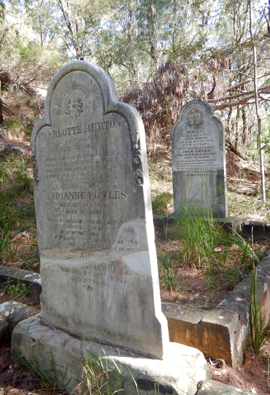 ◄ It’s only a short paddle from Marramarra to nearby Bar Island, we took a canoe across. The fireplace and chimney is all that remains of St John’s Church on the island, which dates from 1876 and was also used as a school. There’s a scatter of early settler’s graves beside the church and at a highpoint on the island a memorial to John Sandell and Malcolm Buckman, two young Outward Bound canoeing instructors drowned in 1963 along with five of their students. In fact the accident happened at Lake Hume near Albury, nowhere near the Hawkesbury River. Their memorial is here because the Marramarra Lodge was formerly an Outward Bound camp. A shell midden on the northern side of the island is an indication of earlier indigenous visitors.