My recent Australian travels started with the ascent of Mt Kosciuszko (Australia’s highest peak) and continued north to Canberra (the nation’s capital), Sydney and the Hawkesbury River. Before venturing in to the northern state of Queensland there was an unexpected visit to Byron Bay and Tweed Heads for the funeral of Lonely Planet author Geoff Crowther. From there I’ll be posting on Brisbane, the train trip to Longreach, Longreach itself (and the Qantas museum), Winton, the Lark Quarry dinosaur site and Moreton Island. Plus a post on Daphne Mayo, the artist I encountered in Brisbane and then in Winton.

There was local outrage bubbling over when I arrived in Byron Bay due to a new Netflix reality show to be called Byron Baes. It seemed nobody was very keen on the idea. 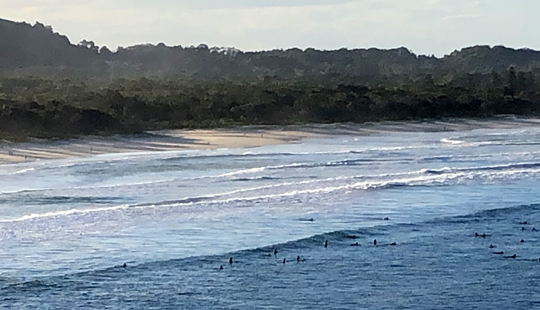 ▲ Nevertheless the surfers were out catching the waves at Broken Head … 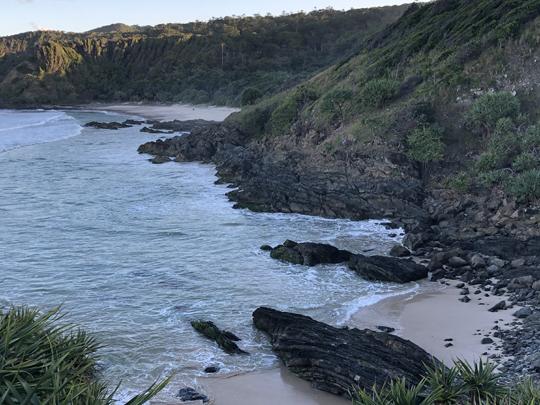 ▲ and a short walk south King’s Beach was as beautiful as ever. I was staying with ex-Lonely Planet publisher Richard Everist and the next day we drove north to Tweed Heads, just south of the New South Wales-Queensland border … 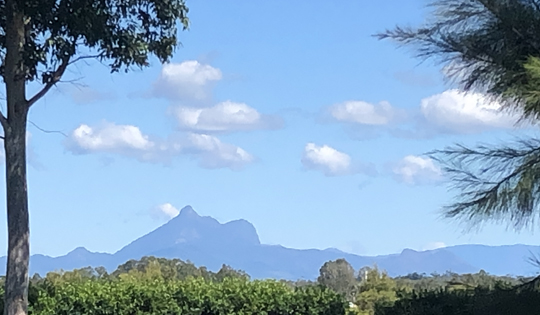 ▲ and in the shadow of Mt Warning (Wollumbin). I climbed the mountain in 2016, but perhaps you can’t anymore. It’s another location, like Uluru in Central Australia, now off limits for cultural reasons. Climb it or just look at it, having the mountain in the background was a fine departure point for Geoff. The European name is courtesy of Captain Cook who thought it was a good warning for the approaching maritime dangers of Point Danger, where today NSW meets Queensland. 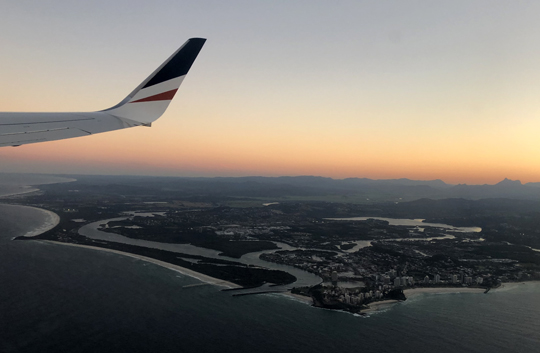 ▲ I flew out of Coolangatta, the airport for Queensland’s Gold Coast, with Rex, a regional Australian airline which, post pandemic, has decided to compete head on with Qantas and Virgin. As we climbed away and headed south towards Melbourne there was Point Danger and in the sunset horizon Mt Warning is popping up right over to the right of this photograph.

Since Geoff’s death I’ve been pleased to note the recognition of his pioneering travel writing. Apart from my own blog on this site, the Lonely Planet website has also been Remembering Geoff Crowther. The Independent in London noted Geoff as ‘The Patron Saint of Travellers in the Third World.’ Geoff’s son Ashley and I spoke about Geoff on BBC Radio’s Last Word programme in the UK. Also in the UK there were obituaries for Geoff in The Times and the Financial Times. The New York Times reported that he ‘Guided Travelers Looking to Get Lost.’ Geoff would be proud of that one.

Disappointingly the only obituary in Australia has been the excellent one Richard Everist wrote for the Byron Shire Echo. Still the Australian mainstream media might yet catch up with the British and American competition, after all, he was an Australian.