Going Places – where I’ve been recently


I have really not gone places for over a year now – 16 March 2020 I was on the island of Socotra in Yemen. Then I flew via Aden in Yemen to Cairo, spent a night there and continued via Abu Dhabi in the UAE to Melbourne. 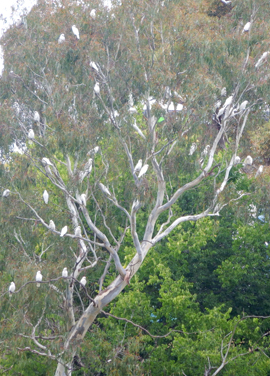 Where I had to go into ‘self isolation’ for 14 days. I was lucky, a few days later and I would have ended up in one of Australia’s ‘death hotel.’ No, I wouldn’t have died, but death escaped out of those hotels in Melbourne, 820 of Australia’s total Covid-19 909 deaths are from Victoria and Melbourne, almost all from the hotel lockdowns.

◄ You don’t have to go anywhere, sometimes travel comes to you. Recently we’ve had a cockatoo convention right outside my back window. Look across the Yarra River and for days the trees were crowded with gathering of those snowy white (and incredibly noisy) birds. They’re the very epitome of an Aussie bird, a bovver-bird. 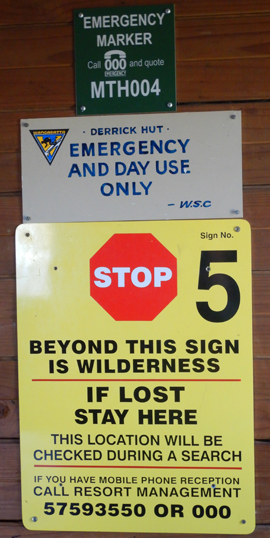 ▲ Just before Christmas I drove up to Windiligong (Victorian Alps, just outside Bright) and stayed with Don Whitford. We went cycling along the Rail Trail which now runs over 100km ‘Murray to the Mountains.’ We didn’t go that far.

◄ And we drove up to Mt Hotham, went walking and beyond the ski resort region (this was mid-summer, so no snow) soon encountered signs warning us were venturing into ‘wilderness.’ No danger that we were going to get lost. 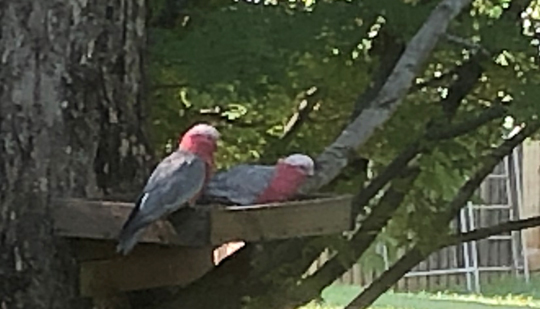 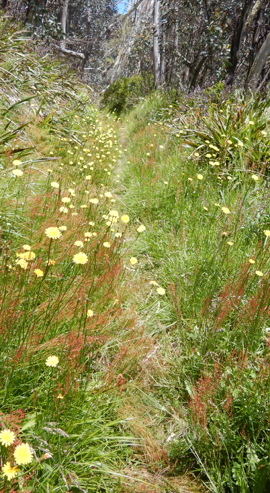 ▲ Back in Wandiligong we’d sit outside Don’s place, sipping a sundowner beer and watching the galahs – another Australian parrot – at his bird feeder platform.

◄ Up at Mt Hotham our walking took us along the Cobunga Ditch, a surprisingly long waterway dug by Victorian era gold miners for their gold-sluicing operations. For most of the distance the walk was green and lush with the track lined by wildflowers, it was that time of year. 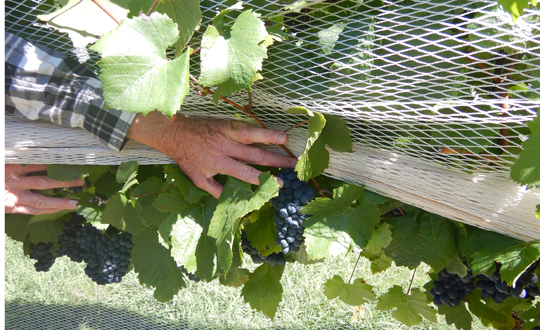 ▲ Just a week ago I drove up to Jamieson, another town like Bright on the fringes of the mountains, to visit John Eason at his Mt Terrible Winery. John produces some very nice pinot noir from his small winery, another few days and it would have been grape picking time.

Returning to Melbourne I took the back road from Jamieson down to Eildon on the edge of Lake Eildon. Wow, what a road, twisting, turning, climbing, descending and in 60km I only saw one other car in either direction – nothing else either, no buses, trucks, motorcycles, bicycles. That single car was travelling much faster than me, shot by and disappeared down the mountain. 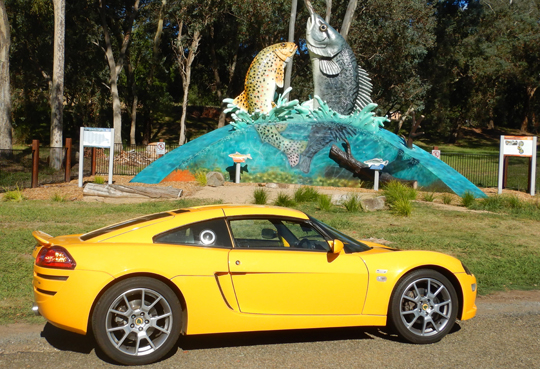 ▲ Back on the flat I paused at this very nice new sculpture of a Murray Cod and a rainbow trout. But when I got back home I discovered it was so new it hadn’t even shown up on Google Maps yet, where was it? An email to the Lake Eildon tourist office got a reply in precisely 8 minutes: Snobs Creek Fish Hatchery.

▲ Late February I flew down to Adelaide for a few days at the Adelaide Arts Festival. This was the airport scene on arrival, a long line of people to check you had an entry permit to the state. Sadly one of the worst aspects of the pandemic in Australia has been that Australia has disappeared. The island-continent has dissolved into a bunch of separate states each busily shutting down their borders and imposing regulations to arrivals from other parts of what used to be ‘Australia.’ So I had to get up after midnight to download a permit (they didn’t issue them until midnight) before my dawn flight out of Melbourne. The real absurdity was that Adelaide had far more coronavirus cases than Melbourne! 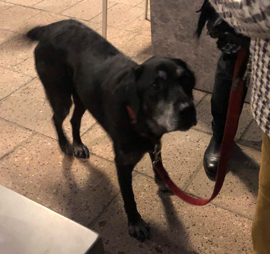 ◄  I got to meet director Neil Armfield’s dog Lock at the after party for the opera performance of A Midsummer Night’s Dream. Lock didn’t have to sing, but he was there on stage the entire time with the ‘mechanicals’ and that tail, wagging in my after party photo, wagged throughout the performance. 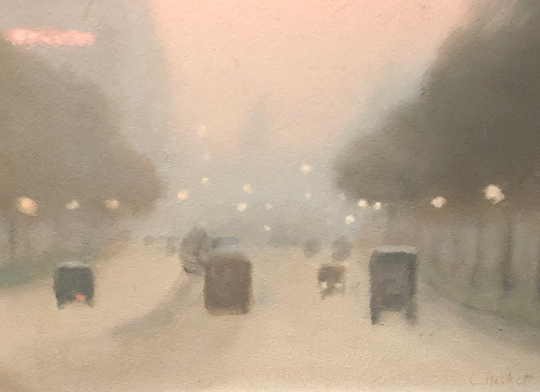 And I caught the Clarice Beckett exhibit at the Art Gallery of South Australia. I’d never heard of Ms Beckett before, Melbourne artist, quite prolific and with a very distinctive style, but really unrecognised during her life and until fairly recently. This is the biggest retrospective for her work – which is reminiscent of Turner or those other ethereal, misty, European artists. A couple of the 100+ works in the exhibition are in Russell Crowe’s collection. 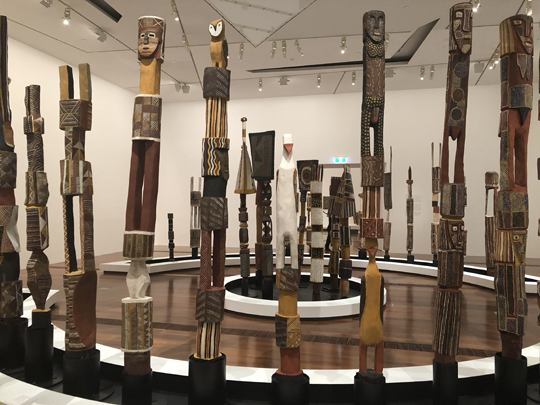 There have been other exhibits including the wonderful art of the Tiwi Islands at the NGV. The Tiwi Islands are just north of Darwin in the Northern Territory and I wrote about them in my book Tony Wheeler’s Islands of Australia for the National Library in Canberra. It was a terrific exhibit featuring bark paintings, statues, often towering tutini burial poles and recent ceramics. There’s a clear blend between Aboriginal, Indonesian and PNG influences. 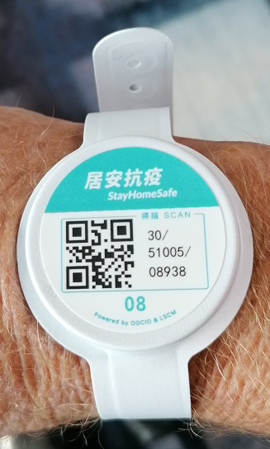 ▲ We are simply not allowed to leave Australia but in other places travel has not been so restricted. My Hong Kong based friend Rowland Burley left Hong Kong three times during the pandemic and each time had to self-isolate at his apartment. Then the fourth time he had to go into 21 days of hotel quarantine at his own expense, which cost him about US$4000. And that’s what happens to you if you wander out of your room. He had three months travel – Chile for the solar eclipse, then via Europe to South Africa and Kenya – before his hotel lockdown.

◄ The tracking wristband from one of his self-isolation spells.

Even if you weren’t on the aircraft there was one pandemic flight which made a lot of people happy. US travel executive Tom Glocer wrote about it in the Viewpoint column in the online travel newsletter Skift. He was looking forward to Donald Trump’s final Air Force One flight down to Florida as the year’s ‘single most hopeful, feel-good travel story for everyone in the world.’ It was late night in Melbourne and one hour later in Washington DC the about-to-become former president would be heading off to Mar-a-Lago in Florida, hopefully never to return. Well unless it’s to be hauled into court and put on trial. The people around my dinner table in Australia raised their glasses to his departure.