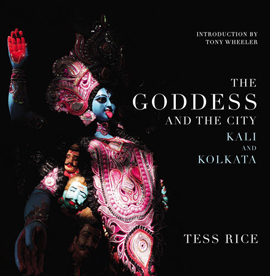 I’ve been back to Kolkata enough times that I really don’t need reminding why the city fascinates and why, like so many other Kolkata visitors, it’s somehow got me in its power. My introduction to the book says it all:

What is it about Kolkata – or Calcutta as I will probably always remember it – that simply gets beneath the skin?

My own Kolkata history goes back a long way, I turned up in 1972, at the sub-continental finale of the Hippie Trail, before hopping across to Bangkok, Thailand and South-East Asia and a new chapter on my travels. It was less than a year from the end of the violent war that turned East Pakistan into Bangladesh and the refugees in the city’s streets were a clear reminder of that conflict. We stayed in the Salvation Army Hostel on Sudder St, a locale which became ground zero for throngs of backpackers in subsequent years. I was back in 1980, working on Lonely Planet’s first India guide, and this time we shifted across the street to Fairlawn to play our part in that colourful hotel’s fantasy link to the Kolkata of the colonial era of the Raj.

There were numerous subsequent visits, we even took our very young children there, our daughter had just turned three in Kathmandu and our son had not yet reached his first birthday. On that occasion we stayed with Ashok Khanna, an Indian university friend from my London days. When the two seater sports car I owned at the time was too small to convey friends I used to borrow Ashok’s Volkswagen Beetle and there it was in Kolkata, looking as if it had spent its entire life there. Cars can age fast in India. There was a visit in 1997 with the photographer Richard I’Anson, when we set out to document the story of Asia’s bicycle rickshaws – including the hand-pulled ones of Kolkata. Even when I wasn’t there myself there were lots of reminders that there were others for whom Kipling’s City of Dreadful Night had somehow found a place in their heart. Through the 1990s a Melbourne acquaintance who I only seemed to bump into from time to time – was his name Grahame? – would always announce that he was just back from Kolkata, as if it was an addiction for which he regularly needed another fix. 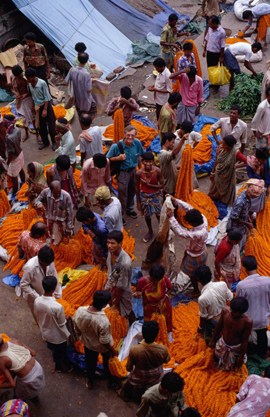 ◄  me amongst the marigolds, in the Kolklata flower market in 1997

So Tess Rice’s wonderful book is a timely reminder of all the – timeless – things that make Kolkata the city it is. Where everything seems instantly old, the shop signs seem pre-aged and the street signs tenaciously hang on to an earlier life, will Mirza Ghalib Street ever move on from being Free School Street? Even the Kolkata-manufactured Ambassador cars, the ‘King of Indian Roads’ were a relic before they’d even rolled off the assembly line? Perhaps that ancient, washed-out look is a reason the city is such a magnet for a fine photographer’s camera lenses, when colour appears it’s always in a magical version. Is there a more orange shade of orange than the marigold garlands that seem to sing out ‘Kolkata’?