Dust on My Shoes – Peter Pinney


So why did I never hear about this book before? Peter Pinney set out to travel after WW II, he’d spent the last spell of the war in Bougainville, that island off to the south-east corner of Papua New Guinea heading towards the Solomon Islands, where it really belongs. I travelled through Bougainville in 2012 as part of my Dark Lands travels and indeed I ran into assorted reminders of WW II, including the wreckage of Admiral Yamamoto’s Betty Bomber. As the war dragged towards the end Bougainville was bypassed, the war continued on to its conclusion with Hiroshima and Nagasaki and Pinney and his fellow Australian troops were left to round up the remaining Japanese combatants. They weren’t going anywhere, they were totally cut off from Japan, but they weren’t planning to surrender either. It was not a pleasant process. He wrote about his Bougainville experiences in a trio of books – The Glass Cannon: a Bougainville diary 1944-45, Road in the Wilderness and The Barbarians: a Soldier’s New Guinea Diary. 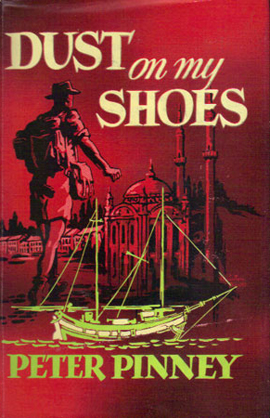 The war over, Pinney was still in his mid-20s and he set off to travel, something he continued to do for the rest of his life. Dust on My Shoes, his first and probably his best book, kicks off in Greece. It’s 1948 and the country is a mess, there’s a war going on between the Communist and anti-Communist forces which led to decades of turmoil. From Greece it’s Turkey, then south into Syria, east through Iraq, Iran, Afghanistan, Pakistan, India and finally Burma, where there’s another war going on. In fact it’s pretty much war, confusion, craziness all the way, all of it compounded by the fact that Peter really has no money, he’s making it up as he goes along.

Peter’s adventures often gets described as ‘picaresque,’ which is to say ‘dealing with the adventures of a rough and dishonest but appealing hero’ or someone ‘who lives by his wits in a corrupt society.’

I really enjoyed the book, but at times I thought he was thoroughly dislikeable, the sort of guy who ‘gets into a revolving door behind you and comes out ahead.’ There were a fair number of people – often innocent people – who were clearly ripped off by Mr Pinney along the way. No question, however, he was on the hippie trail across Asia decades before the term was invented and when it comes to being a penniless backpacker he would definitely be a gold medal winner.

I found my copy of Dust on My Shoes at a library, you can probably find a copy via eBay or Amazon’s used book connections although they’re not cheap. I’m really surprised it’s not been reprinted although today the editors would be working overtime to clean up the racist and sexist elements of the text! If you’d like to know more about Peter Pinney try this John Borthwick article.

Travelling in 1948 and 1949 was clearly a very different story from travel in more recent years. I’ve just read another book – The Towers of Trebizond – which in fact is a novel rather than a straightforward travel account, but it certainly conjures up Turkey in the early to mid-1950s in a very fine fashion. At times the book’s key character has some decidedly Pinney-like travel experiences: Applying for a Syrian visa in Turkey she has a conversation with the Syrian consulate:

He said, ‘Have you ever been in Israel?’
I said, ‘Israel? Good gracious no. Why on earth should I want to go there, of all places?’

In fact she’s on her way to Israel to meet her mother and extract some money from her.

For travel in the years soon after WW II it’s hard to beat Norman Lewis. After visiting Naples and Capri in 2013 I wrote about his classic book – Naples ’44 – but also mentioned his two perfectly timed South-East Asian titles, A Dragon Apparent (published 1951) takes him through Cambodia, Laos and Vietnam with French power in Indo-China about to collapse and the Vietnam War waiting in the wings. In Golden Earth (published 1952) he wanders through Burma, a country also in chaos although the long dark years of rule by the generals was also still yet to kick off. All three classic Norman Lewis titles are published by Eland Books.