Down the Thames with the Queen


Like many people in London I devoted some of yesterday to getting rather wet as a thousand odd boats rowed, paddled and powered their way down the Thames as part of the Queen’s Diamond Jubilee Pageant – that’s 60 years since she took up her role as Queen of England.

▲  One of my river parade favourite, this multiple gondolier vessel, proudly waving the Italian flag out front.

We started out with a circuit on the London Eye (thank you Simon Calder), great views although unfortunately the first boats hadn’t come into view by the time we’d completed our rotation. 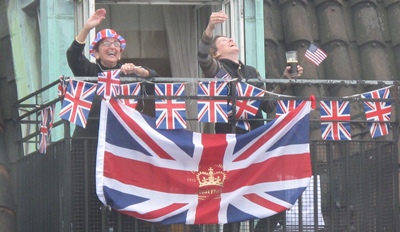 ▲  Never mind, there were lots of enthusiastic spectators already in position.

◄ Isambard Kingdom Brunel, the great Victorian engineer. One of the first pioneering projects he was involved with was the Thames Tunnel at Rotherhithe, which he built with his father Marc Isambard Brunel. The tunnel is still in use today, as part of the London Over- ground network. The Brunel Museum in Rotherhithe is nearby.

After leaving the London Eye we took the tube downriver to watch the boats as they came by Rotherhithe (thank you Allan and Christine McCartney). And get wet watching them. Another favourite, this crew of Isambard Kingdom Brunels. Well they were all wearing top hats.  ▼