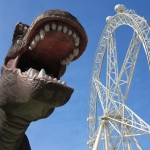 Having a big ferris wheel was quite a bit city thing for a spell. I blogged about the London Eye, the Singapore Flyer and Melbourne’s Southern Star back in 2009. On Wednesday 2 October I’ll be talking about ruins at Global Heritage Fund’s annual dinner at Menlo Park...

Down the Thames with the Queen

Like many people in London I devoted some of yesterday to getting rather wet as a thousand odd boats rowed, paddled and powered their way down the Thames as part of the Queen’s Diamond Jubilee Pageant – that’s 60 years since she took up her role as Queen of England. ...