There were no wildlife trips in 2010, no African safaris looking for the big four, no whale watching trips (although there was a visit to Australia’s last whaling station), no Antarctic visits to seal and whale colonies. Fortunately the birdlife comes right to my house in Australia – I’ve got backyard birds and I can watch my courtyard blackbird hop in and out of its nest as I type this. 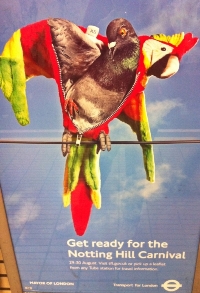 ◄ In fact I encountered my favourite birdlife in 2010 in the London tube, an ad for the Caribbean-flavoured Notting Hill Carnival with a lowly London pigeon wriggling into a much more colourful parrot outfit. We arrived in London on one visit and the same day encountered parrots in Hyde Park. ‘Grey squirrels on wings,’ thundered the Evening Standard newspaper, they’re pet escapees which have managed to make London home, despite the weather.

Then I fed the crocs and the fish (and caught one too) in Northern Australia and encountered jumping cats & Burmese cats in Burma. It was in Pindaya in Burma where I also met up with the biggest spider of the year, man-eating even. ▼