Time for my end of year sum up, on 19 December I looked at Museums & Art Galleries. Today it’s cars and bicycles. No change in the cars Maureen and I own in Australia – a Lotus Europa, a Mini Cooper S, a Toyota Prius. Or in the UK – no car at all. 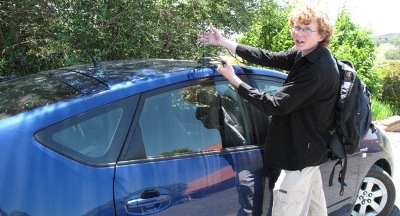 ▲ Techie installs an aerial on the roof of my Prius so we can chase our high altitude balloon in November.

But in the London I have signed up for the car sharing scheme Zipcar – car clubs as they’re known in the UK. During the summer I made an assortment of Zipcar trips around London or further afield. In a Toyota Yaris, Toyota Prius, VW Golf and Honda Insight. The longest trip was three days and over that period it was line ball whether I was better with the Zipcar or a regular rent-a-car, but on the shorter trips – a couple of times we took a Zipcar just to go round to a friend’s place for dinner – the Zipcar was much cheaper. Plus there’s the convenience, no forms to fill in, just pick the car up from its streetside parking spot, unlocking it with what looks like a credit card. So I’m a Zipcar convert. Although I don’t need it I’ve tried the Melbourne car share equivalent, Flexicar. 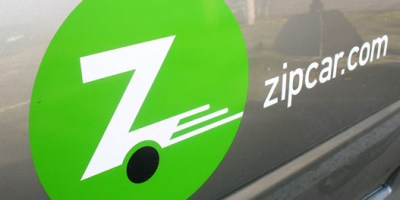 There were a few other rent-a-cars in various places, most peculiarly a Renault Vel Satis I had for a week in Corsica. The Vel Satis was a weird French attempt to make something competitive with a BMW 5 series by making it, well, weird. It failed. 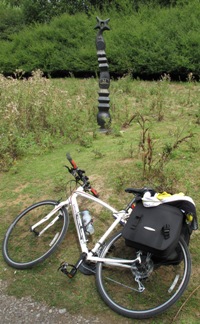 Bicycles – no change in Australia – I’ve still got a Brompton, a Bianchi and a Wheeler. I used my Wheeler mountain bike on the Tour d’Afrique ride last year. In London I now ride a Specialized Sirrus, a ‘flat bar road bike’ which means a regular skinny tyre, 30 speed road bike, but without the drop bar riding position. I really like it and broke it in with a little three days ride from London to Paris. Followed up by a midnight to 5 am ride through the night from London to Brighton on the English south coast.

My Specialized has definitely got me out of London, but around the city I’ve done a lot of riding on ‘Boris Bikes,’ the London share bike scheme which launched very successfully while I was in London this past summer. I’m a Boris Bike fan as well! Yes my other city, Melbourne, also has a share bike scheme and interestingly the bicycles, made in Montreal, are identical. Unfortunately while the London scheme has been a big success the Melbourne one has done very badly, probably because Australia’s compulsory helmet law discourages casual use.