My Israel and Palestine travels took me to these two towns. Hebron conjures up the worst aspects of the Israeli-Palestine dispute, while Nazareth indicates that the two sides can live together. 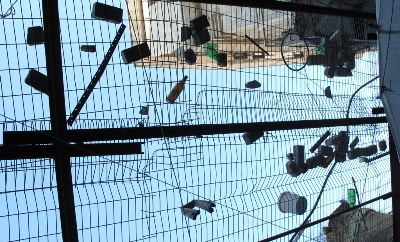 ▲  The wire mesh over this old city street in the centre of Hebron is to protect Palestinians from rocks, bricks and rubbish hurled at them by Israeli settlers overlooking the street.

Hebron, population 160,000 is about 30km south of Jerusalem. It’s the largest city in Palestine and noted for the Cave of the Patriarchs, the tomb of the Old Testament prophet Abraham. This makes it an important religious location to Judaism, Islam and Christianity. Hebron’s problems centre around 500 Jewish settlers who have taken up residence in the old city area. To protect them from Palestinian militants requires several thousand Israeli military. 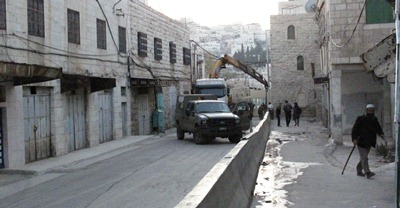 ▲ Are the Israelis instituting apartheid in Palestine? Well don’t plan to drive down Shuhada St, through the centre of Hebron, if you’re a Palestinian. You can walk on the right side of the barrier. The Israeli army was supervising movement of barriers when I took this photograph.

The military have closed down 500 Palestinian shops and businesses in the old city area and the decline in business due to multiple checkpoints, restrictions on the movement of Palestinians and settler aggression has led to another 1000 Palestinians shops closing down. The Jewish settlements in Hebron are like some poisonous weed, once they have taken root in the garden everything around them dies. So do people, Palestinian militants have killed settlers and soldiers and an even greater number of Palestinians have died, the biggest death toll from Brooklyn-born Israeli madman Baruch Goldstein who massacred 29 Muslims praying in the Ibrahimi Mosque and wounded a further 125. Palestinians look upon ‘Brooklyn’ settlers as the worst possible variety!

If Hebron was the most depressing stop on my Palestine and Israel travels, then Nazareth was the most hopeful.  I’ll add my thoughts on Nazareth tomorrow.