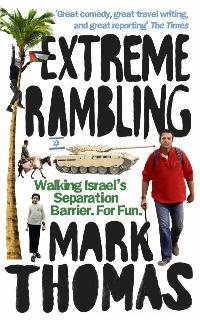 I missed British comedian Mark Thomas’ ‘walking the wall’ performance when I was at the Edinburgh Festival in August, but I have done the next best thing, read Extreme Rambling, the book of his walk. Rambling is walking British fashion, A to B, not necessarily by the most direct route, on foot. Which is just as well because the Wall does not go anywhere in a straight line. It certainly does not follow the Green Line, the original border between Israel and Palestine. The Green Line runs for 315km, the Wall, if it’s ever completed, will extend for more than 700km.

The wall wiggles back and forth, encompassing more and more of the Israeli Settlements and attaching them to Israel proper. It’s hard to say how long it might end up, because it’s a work in progress and there are frequent changes, usually extending it to haul in even more Palestinian territory. When Mark set out to walk the wall it ran for 423km. As a comparison the Berlin Wall ran for 155km. It was the ‘Wall of Shame’ according to West Berlin mayor Willy Brandt and that’s certainly a term you could apply equally well to this one. It’s an obscenity.

Whether it works is open to argument, ‘it stopped the suicide bombers’ claim its proponents. ‘The Second Intifada was burning out anyway,’ respond its critics. Whether or not the wall has worked right now I suspect one of Mark’s concluding thoughts is probably spot on: ‘I fear Israel will find the Barrier does not deter suicide bombers but, instead, simply breeds the hatred from which they spring.’ 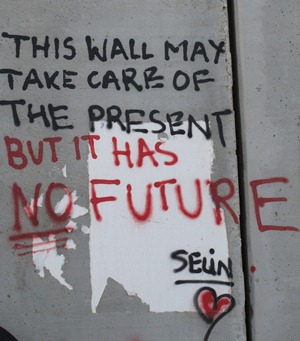 ◄ I’d put my money on the accuracy of this graffiti I photographed on the wall, close to the Bethlehem checkpoint.

This is the third account I’ve read of walking in Israel and Palestine and Raja Shehadeh’s Palestinian Walks is still the best.