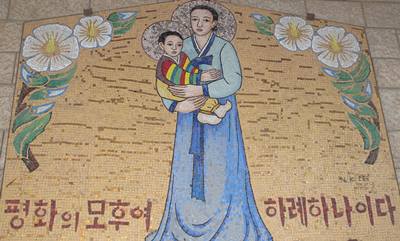 ▲  The Basilica of the Annunciation in Nazareth is supposed to be on the site of Mary’s home, where the Angel Gabriel appeared to announce that she might be a good virgin, but she was still going to have a baby. The church is a curious structure, plonked on top of the ruins of a Byzantine Church (which in turn was on top of a Crusader Church and on back through history). An international collection of art works, mainly mosaics, of Mary and child frame the basilica, this one is Korean.

If Hebron (posted yesterday) was the most depressing stop on my Palestine and Israel  travels, then Nazareth was the most hopeful. 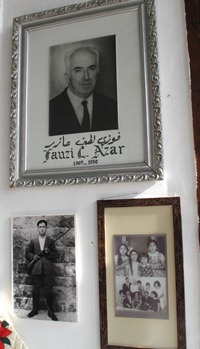 ◄  Maoz is also the guiding light behind the Fauzi Azar Inn in the heart of the old city. A beautifully restored old Arab mansion it’s become the focus of the renovation of the old city. As I walked around the winding streets of the old city with Maoz it was clear that he’s widely respected and admired for the breath of international fresh air he’s brought to the town. Suraida, the grand-daughter of Fauzi Azar, can be found behind the front desk at the inn and she’ll recount the building’s history and the story of its rebirth after 20 derelict years. 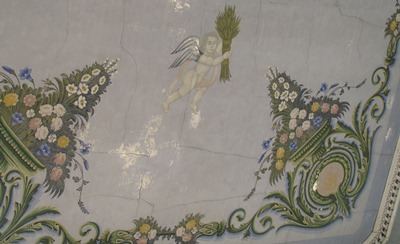 ▲ The inn is particularly noted for its beautiful painted ceilings, dating from 1860 to 1870 and the work of a Lebanese artist. The grain-toting cherub indicates the family were Christian Arabs. If you’re staying at the inn check the copy of the coffee table book Wall & Ceiling Paintings in Notable Palestinian Mansions in the Late Ottoman Period 1856-1917 in the lobby.