Uganda may not have the big name attraction – ie really well known wildlife parks – that you find in other African countries, South Africa, Botswana, Kenya or Tanzania for example. But it does have gorillas. The other big name gorilla country is Rwanda, but when it comes to costs Uganda is the gorilla dollar winner – a gorilla visit in Rwanda costs US$1500, in Uganda it’s US$600.

▲ Why is gorilla tracking so expensive? Well this sign in the Bwindi visitor centre explains it all: ‘If all the mountain gorillas in the world queued up in single file, the line would be approximately 1km long. That’s the distance from this visitors’ centre to the end of Buhoma village.’

There are about 1000 mountain gorillas in the world. Against over 7.5 billion human beings. Line all of us up and we’d stretch right the way around the world. And again. And again, about 100 times in all. So there aren’t a lot of gorillas to track and there are a lot of human beings – rich human beings – who’d like to see them. Even with that cost there’s still a long waiting list so if you want to see them plan ahead. If you can afford it then the sky high prices are a good thing, gorillas have become a very important commodity for those gorilla countries like Uganda or Rwanda. The governments definitely want to protect their gorillas. 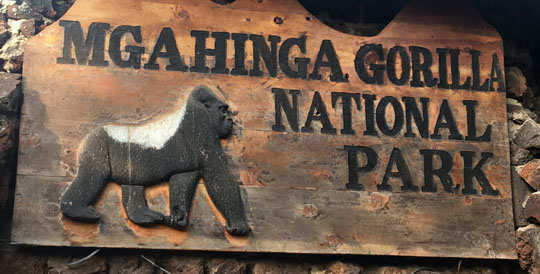 ▲ I could have gone gorilla tracking at the Mgahinga Gorilla National Park, where I climbed the Mt Gahinga extinct volcano. In fact I’ve probably already seen the gorillas I might have encountered there because their forest extends across the border into Congo Democratic Republic and back in 2011 I went gorilla tracking in the Virunga National Park in DRC. With Maureen, my wife, I’ve also seen gorillas in the Central African Republic. 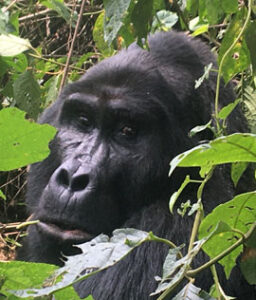 My Uganda gorilla tracking took place in the Bwindi Impenetrable Forest, well what a cool name to start with! If you’re going looking for gorillas clearly an impenetrable forest is a good place to look for them. I was staying in the village of Buhoma – gorilla tracking central in the Bwindi forest – and we assembled at the visitor centre for our gorilla briefing. The gorilla groups are limited to eight people and since I was by myself I tagged along with the very friendly American Aguilar extended family.

From our starting point, only a km or two from the visitor centre, we climbed for about an hour. Some of our group had porters to carry their daypacks and their porters did some pushing and pulling as well. At that point Florence, our very capable guide, announced that the trackers haven’t been able to find our gorilla family yet. So we might as well sit down and wait. The trackers know where the gorillas have bivouacked for the night so in the morning they follow the trail as they head off through the forest.

We waited for about two hours, in a comfortable glade in that impenetrable forest. They always find their gorillas Florence insisted and just when we were beginning to wonder if that was always true our Katwe gorilla family were located. In fact they were quite close to us, pretty much at the same level although getting to them involved 20 minutes or so of real bush bashing. Perhaps this forest is indeed impenetrable we began to think. 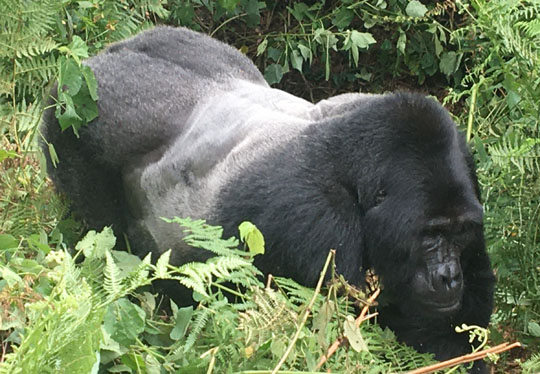 ▲ So that’s why they’re called a silverback

And there they were, the hulking silverback as usual, every gorilla family is led by a boss silverback. The Katwe family featured a bevy of females and some young gorillas including two very playful baby-size gorillas. You’re allowed just one hour with them, but our family provided full entertainment for that hour. It’s amazing how virtually oblivious to us they were, although when the really young ones got interested in us a couple of times, we retreated. Keep three metres away is the official line although nobody seems to have told that to the gorillas. 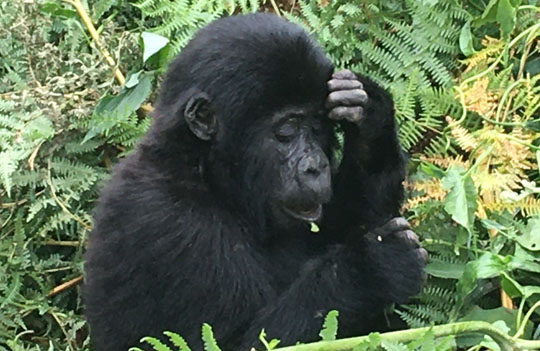 ▲ ‘What is life all about?’ That seemed to be the conclusion this head scratching baby gorilla had reached .

They’re big, and the really big one are certainly not pretty. When first discovered they certainly got bad press, tales of these vicious monster beasts tearing unlucky explorers limb from limb were the order of the day. In fact gorillas are gentle giants and vegetarian giants at that. They’ve been critically endangered by loss of habitat and the story might have been heading towards extinction if they hadn’t, quite suddenly, become major tourist favourites. Watching the Katwe family’s baby gorillas tumbling up against their King-Kong-sized father certainly emphasised the gentle giant description.

My Uganda visit also included chimpanzee tracking, rhino tracking and lots of other wildlife. More on that in my next blog.