2022 has already been my year of Africa, I was amazed by Chad in February and in July I visited Uganda, Somaliland and Djibouti.

Let’s start with Uganda, I’ve been to Kenya and Tanzania – the other two countries which formed the British colonial era East African trio – but for some reason Uganda remained unvisited. Well it doesn’t have that high mountain (Kilimanjaro which I climbed back in 2007), or exotic Zanzibar Island, or those big name national parks like the Serengeti, Ngorongoro or Masai Mara. In fact Uganda offers pretty much the same wildlife opportunities and one big Unique Selling Point in that category: gorillas. 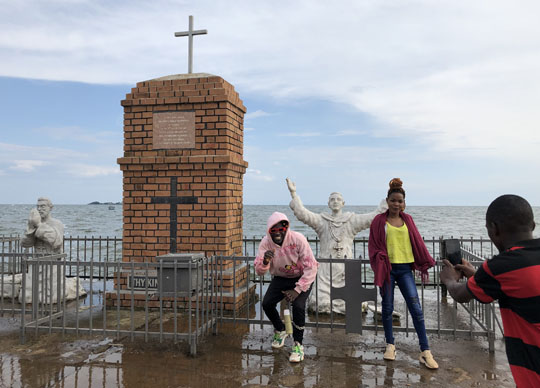 So I started my Uganda travels in Entebbe. Uganda is unusual in that its main airport is not near the capital and largest city, Kampala, but 30km away at Entebbe. Many visitors start or finish their Uganda travels with a day in Entebbe, before or after enjoying the Kampala chaos. Many visitors skip Kampala completely and stick to the national parks and the wildlife. On my afternoon in Entebbe I visited Kigungu Missionary landing site, where the first Catholic missionaries made landfall. 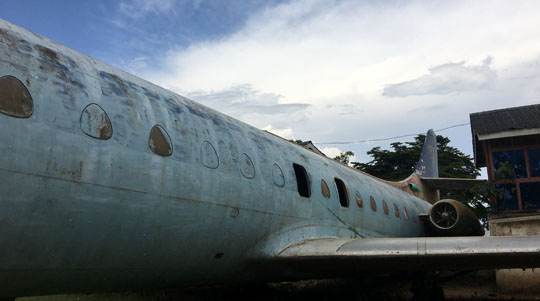 ▲ Close to the airport I was told the aircraft wreckage at Aero Beach included the Air France Airbus which featured in the 1976 Entebbe hijacking, best remembered for the movie Raid on Entebbe. In fact Air France retrieved their aircraft very quickly. This rather battered looking Caravelle, there’s also an equally tatty 707, had nothing to do with the hijacking events. The equally battered Russian fighter aircraft might include MIGs destroyed by the Israelis during the raid, or they might just be miscellaneous past-their-use-by date Soviet era aircraft. 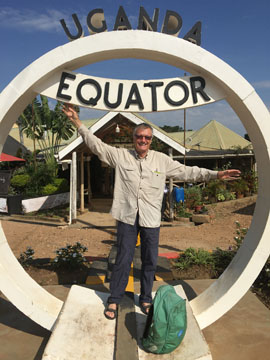 ◄ I crossed the equator a couple of times during my visit to Uganda. Despite its equatorial location the temperature was always surprisingly comfortable, due to an average altitude of over 1000metres. For a visitor Uganda was a surprisingly comfortable country in many ways, the roads were generally good, outside Kampala the traffic was generally light, things seemed to work. 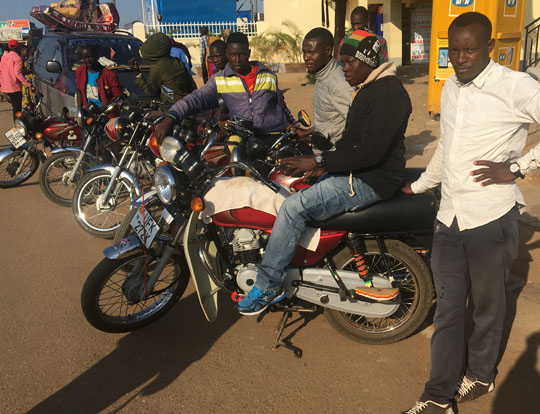 Which is not to say many people don’t work very hard. There are always lines of women, always women, toting yellow plastic jerrycans of water home every morning. It was banana season and you’d often see men pushing bicycles laden down with huge bunches of bananas. In every settlement, no matter how small, there would be the boda bodas, motorcycle taxis assembled at every strategic junction waiting to convey you somewhere. Kampala even had the Safe Boda, a company with orange-clad riders toting a spare orange crash helmet for their passengers. I never saw a Safe Boda passenger wearing a helmet. 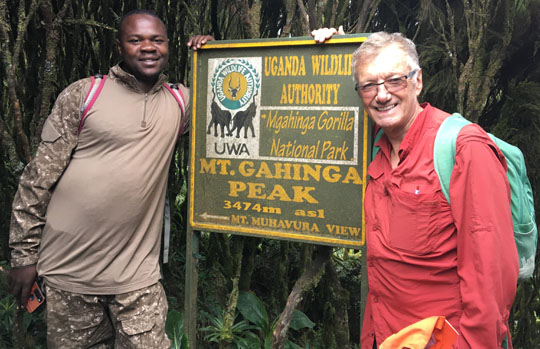 ▲ In the south-west corner of the country I climbed to the 3474metre summit of Mt Gahinga. It’s one of three extinct volcanoes, part of a range which extends into Congo Democratic Republic where the Nyiragongo Volcano is distinctly not extinct! I climbed this lava spitting peak in 2011 when I also encountered the gorillas of the Virunga National Park. 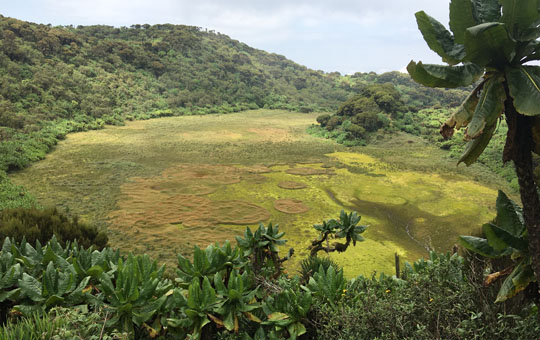 ▲ The crater of Mt Gahinga features a swamp while from the summit you can look into Rwanda. The summit of the next peak to the west, Mt Sabyinyo, is the meeting point of Rwanda, Uganda and Congo DRC. I found climbing Mt Gahinga distinctly hard work. Or perhaps I’m just getting old?

▲ There were lots of noteworthy signs around Uganda. In future this is where my mobile phone is going to be repaired.

▲ And I’ll stick to this tried and true washing powder for my clothes. 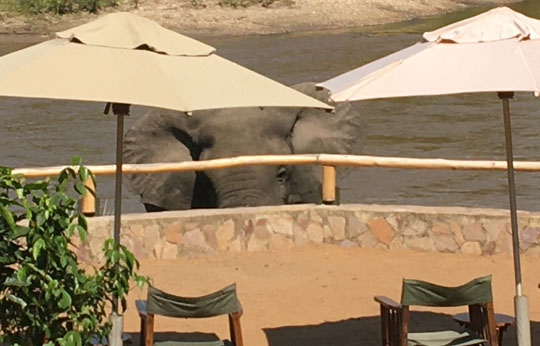 ▲ There was plenty of wildlife to see, I encountered all the traditional African ‘big 5’ – lion, leopard, rhino, elephant and African buffalo – but at the delightful Ishasha Wilderness Camp I didn’t even need to head out on a game drive to find elephants. This one seemed to think he’d join me for lunch and later I thought it was considering clambering up the riverbank to my room for a nap. 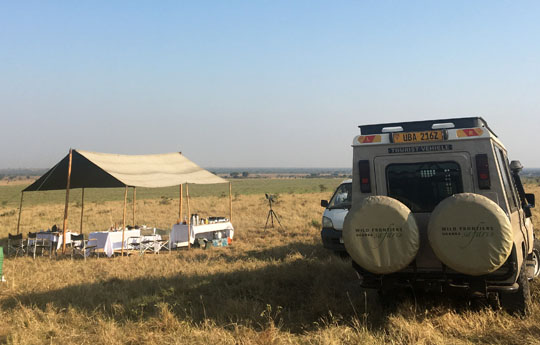 ▲ That morning I’d already been out in time for sunrise and was wondering when we’d be heading back to camp for breakfast when we arrived at a ‘bush breakfast’ set up for me and couple of other camp guests. Yes, this was African safari luxury. 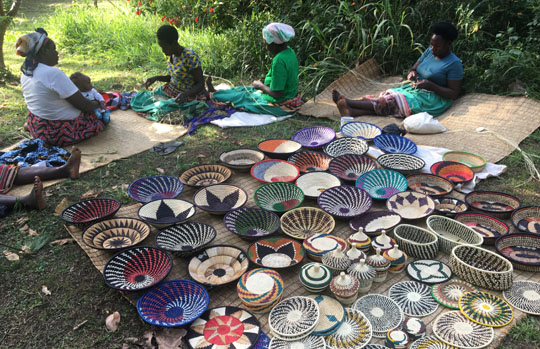 ▲ At Bigodi, near Kibale where I’d gone to see chimpanzees, I did a village community walk which included a visit to the local women’s basket weaving co-op. Very colourful baskets! 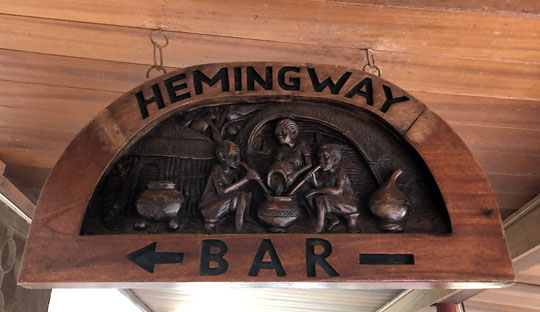 ▲ We didn’t stay in the Masindi Hotel, claimed to be the oldest hotel in the country, but if we had I would certainly have had a beer in the Hemingway Bar. The author stayed here in 1954, a trip to Uganda which also featured two aircraft crashes near the Murchison Falls. 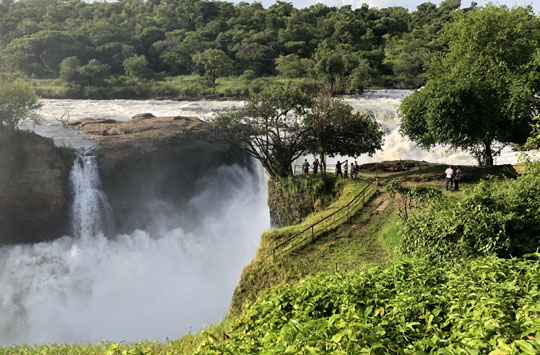 ▲ My Murchison Falls visit was rather more peaceful, but this impressive drop on the Victoria Nile River, on its way down to Lake Albert is certainly worth seeing. Later I did boat trips up the Victoria Nile to the base of the falls, or at least as close as you could get. And down the Nile to its delta at Lake Albert. When the Nile flows out of Lake Albert to the north it’s known as the Albert Nile and then as the White Nile when it merges with the Blue Nile in Sudan. From there it continues north into Egypt as the plain and simple Nile River. 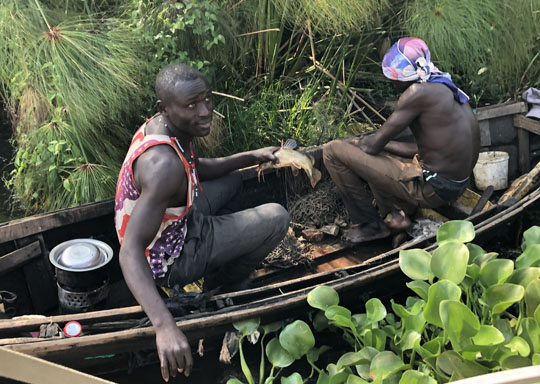 ▲ Right down at the delta we encountered these two fishermen hidden away in the vegetation. They were in a tiny boat and if their village was 15km away it must take quite a few hours to paddle out here. So they don’t just come out for the day, my guide Audence suggested they might stay for a week. Somebody else will paddle out from the village, collect their catch and leave them food. They were quite relaxed about our presence, continuing sorting their nets, one of them in a Donald Trump MAGA singlet. 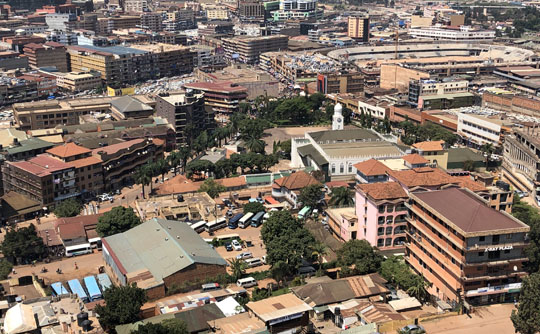 ▲ I did get to Kampala at the end of my two weeks in Uganda and amongst other visits I climbed (there’s no lift) the minaret of the Gaddafi Mosque for the fine views over Kampala with its seven hills.

My Uganda visit included gorilla tracking, chimpanzee tracking and rhino tracking along with lots of other wildlife including an impressive number of hippos and amazingly colourful birdlife. A blog on that part of my trip and a visit to the FREO2 hospital oxygen programme in Africa, from Melbourne University in Australia, will come soon.

My travels in Uganda were organized by Wild Frontiers Uganda Safaris. My driver and guide James Kaheeru picked me up at Entebbe Airport on Day 1 and dropped me off there 14 days later. In between he had an answer to every question and was able to identify every bird. If he hadn’t there was a small stack of Uganda bird books waiting to help him out.