Trapped in my Courtyard


My house has a totally enclosed courtyard and we often have birds nesting in it, for the last few years it’s been a pair of blackbirds who build a nest, lay eggs, hatch out the blackbird chicks. They then hang around for a surprisingly long time before they fly away. Click here for last year’s blackbird story.

This year one of them has dropped by a couple of times, contemplating another nesting session I guess. Then the other evening there was a sudden commotion in the courtyard and a crow bashed itself against the window and tumbled down into the vegetation. Now our courtyard is cat proof, so felines are not a danger to nesting blackbirds, but we did have a magpie drop in once and kill one of the chicks before we could intervene. 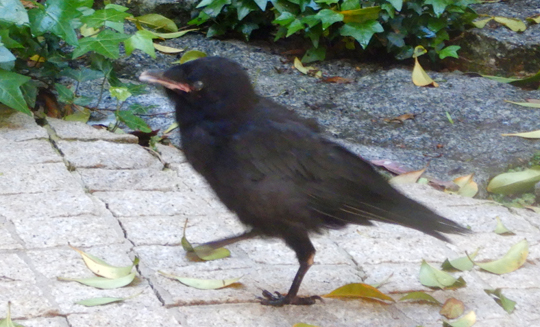 So my first thought was this a killer dropping in, except the blackbirds weren’t yet in residence. It soon became clear that despite its size this is a young crow that doesn’t really know how to fly. Somehow it’s tumbled into the courtyard and doesn’t have the ability to fly out. Anytime it tries it ends up crashing against a window and tumbling back into the vegetation, amazingly not doing any damage to itself. Eventually, as it gets dark, it gives up and retreats into the plant life. 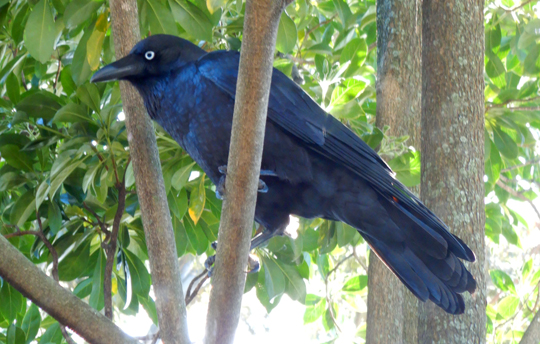 ▲ ‘Dad’ turns up to offer advice

Next morning I’m up before dawn and read on my iPad, not wanting to turn lights on and disturb the crow if it’s still there? Indeed it is, come dawn it’s up, complaining loudly and before long ‘Dad,’ a rather larger and more efficient looking bird, turns up and hangs around pretty much all day. Perched in a tree or perched on the courtyard edge, Dad doesn’t have much to say, but essentially gives our trapped crow the message that he just has to get his act together and fly out of there. Later ‘Mom’ turns up as well, so there’s no shortage of parental advice.

▲ ‘Mom’ turns up as well, both parents tell him he just has to fly away

Escape doesn’t come easy. My trapped crows stomps around the courtyard, complaining, and periodically making an attempt to fly out. Which inevitably ends in crashing into the windows or the trees and back down to earth. Where he shakes himself off and complains again. Mid-afternoon he makes a real attempt, gets up on the top of the climbers (where the blackbirds nest) and after a rest-and-recuperation pause flaps off again, but once again fails – just – to get out. I put some water out for him. Or her, who knows with crows! Food? Well presumably he needs to lose some weight so he becomes more aerodynamic. Come dusk he retreats into the vegetation again, Dad pisses off. Will he get out tomorrow?

The next morning again I’m up soon after dawn and immediately hear my complaining crow. His first morning escape attempt is rather more efficient and although he doesn’t get out at least he doesn’t crash into windows and trees on the way back down. Dad turns up to offer his usual cryptic advice and hops on to a courtyard tree for a closer look. 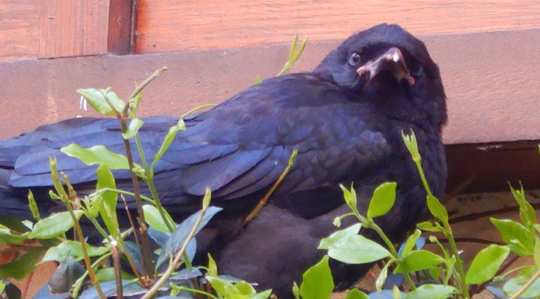 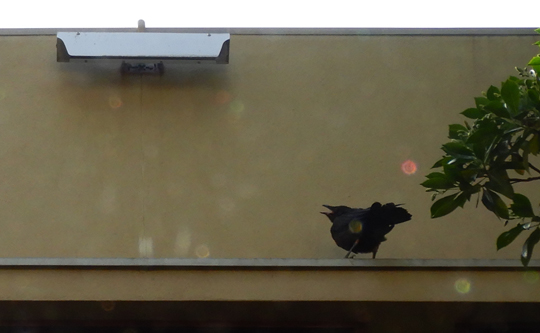 ▲ Again there’s endless waffling, walking back and forth, cawing and complaining.

Mom has turned up as well so both parents are perched on the garage roof, offering occasional encouragement, but not actually overseeing things. Neither of them ever came right down to ground level to show how it’s done, but finally it’s up and away. All three depart. At last. It’s been a long process – one evening, one whole day, one more morning, two nights. Will he ever return?